International Rules: on a hot afternoon in Adelaide the home side threw caution to the wind as Joe Kernan’s men stalled 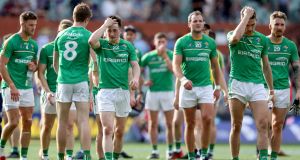 Ireland players show their dejection after defeat in the first International Rules Test at the Adelaide Oval. Photograph: Tommy Dickson/inpho

There was a strong view, substantiated by the evidence of the two most recent contests for the Cormac McAnallen Cup, that Yesterday’s

Test in the Adelaide Oval might well be decided by whoever made the best start.

That didn’t actually happen, as Ireland were the more productive team for much of the first half but gradually the things they were doing well began to dry up and the Australians, with as good a team as they’ve ever fielded in the series, did what all good teams do: refuse to panic and start to execute their skills consistently.

Chris Scott’s team boldly used their defenders to push up and risk being exposed behind their lines. He said afterwards that he might have to modify this approach in order to protect his 10-point lead next weekend but as an attacking gambit it overwhelmed Ireland for a key period.

They even outscored Ireland’s goal tally, something that hasn’t happened since the notorious second Test in 2006 and which was happening for only the fifth time in 41 Tests stretching back to 1984.  So first blood to the home side. From a series point of view, a 10-point deficit has never been overturned and given the exchanges and the news of Pearce Hanley’s hand injury it would be hard to back Ireland to buck that trend but they looked competitive until the wheels came off for a damaging period during which the match disappeared.

There were positives. Ireland’s final-quarter resistance prevented the series being dead in the water. A good crowd – 25,502 was at the upper end of pre-match estimates by the AFL – turned up on a hot afternoon, early 30s, and saw a contest that never died even if it wasn’t the picture of health for phases. Whereas a couple of testy exchanges took place it was also well disciplined with players visibly restraining themselves from the sort of rolling brawls that have caused such trouble in the past.

Ireland’s blueprint under Joe Kernan in his first series in charge two years ago was to keep the pressure on up front by concentrating quality forwards close to goal and also to compete on the kick-outs, which in the international game must travel 45 metres.

To the manager’s frustration, it sort of worked again. Sort of. Conor McManus, for the fourth successive Test was Ireland’s top scorer with 24 and beside him for most of the time was Michael Murphy who ended with 20, including Ireland’s only goal.  Yet they couldn’t replicate the panic of 2015 in Croke Park when McManus, Bernard Brogan and intermittently Aidan O’Shea took the opposition for three goals in the first half. In terms of productivity maybe you couldn’t complain, as the total from the full-forward line was pretty similar to 2015 but finishing wasn’t comparable.

There were some magnificent overs kicked by McManus particularly but he didn’t avail of his goal chances, opting twice to try to chip Aussie goalkeeper Brendon Goddard but neither worked and early in the match when one-on-one he was tackled to the ground.

The third quarter in AFL is variously known as “the championship quarter” or “moving quarter” but in fact it was the 20 minutes between the 26th and 46th – either side of half-time that defined the match.  Ireland went from being 27-17 ahead after a McManus over, to trailing 30-41 after being out-scored by 24-3 in those 20 minutes during which Ireland managed just one over.

There is talk of redemption in Perth but it’s a more an outside possibility rather than a promise.