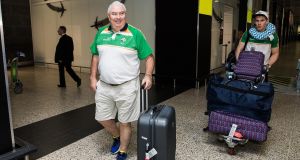 Ireland manager Joe Kernan and player Shane Walsh arrive with their team in Melbourne on Monday evening ahead of Sunday’s clash with Australia. Photograph: Tommy Dickson/Inpho

Ireland international rules manager Joe Kernan has dismissed suggestions in Australia that his team can be targeted physically because as amateurs they lack the strength and conditioning of their AFL opponents.

The idea that the Irish players can be physically targeted – legitimately – has been floated by a couple of sources, Port Adelaide’s Chad Wingard and perhaps more surprisingly AFL chief executive Gillon McLachlan although the latter stressed that he meant within the rules.

On Tuesday morning Ireland had a run-out at Wesley College in Melbourne after which Kernan spoke about the issue of physicality.

“That’s someone just talking. I think they know themselves that the squad we’ve brought – we’re big, we’re strong, we’re mobile. We kick the ball well. They know that.

“They’ve picked a mobile squad as well. They seem to be learning from us in that aspect of the game. Sometimes you don’t know what they’ll bring to the table. The last time we played them, they played a very high game which surprised us to a certain extent. They always seem to have a man free, which causes problems.”

He added that he had no fears that his players, who are a particularly tall panel with a clear emphasis on ball winning, might be intimidated in the physical exchanges.

“I can’t see that happening. I can’t see any of them intimidating Aidan O’Shea, Michael Murphy, Zach Tuohy or any of the other lads either. We’re well able for that. You can be physical in one way or dirty in another and in fairness I think they’ve gone from that.

“They play good football now and I think they know that’s the way forward for the game. Two years ago, we both put up a good show of attacking football and got the supporters at the edge of their seats. That’s why we’re here. Hopefully it works again.”

The final members of the party, captain Aidan O’Shea from Mayo and Cavan’s Killian Clarke were due to arrive on Tuesday night. O’Shea had been attending a wedding at home whereas Clarke was delayed because of confusion about his passport, which arose because its validity expired during the booking process.

1 Sideline Cut: Vignette shows why Bird is the true shark in The Last Dance
2 Argentina rugby great Hugo Porta continues to give back to his beloved game
3 Coming fourth in the Olympics didn’t change this fearless quartet, time did
4 Premier League return moves closer with clubs to vote on contact training
5 Rory McIlroy now realising the power his words carry as world’s number one
Real news has value SUBSCRIBE