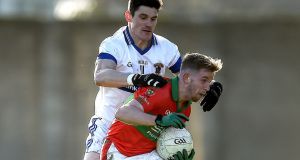 According to those who watch these games with one eye on their betting app, the odds for a Rathnew victory drifted out to 66-1 not long after St Vincent’s hit four points without reply, early in the first half.

Turns out they had the Dublin champions exactly where they wanted them.

Because not for the first time Rathnew seemed to have lured all those present in Aughrim into a false sense of security. They then finished the game with 1-3 of their own without reply, and so pulling off one of the great coups in the history of Wicklow football. It wasn’t so much a battle as an ambush.

St Vincent’s had an unbeaten run in the Leinster club football championship stretching back to 1984. Not anymore.

It may not be a million miles from Marino to Aughrim, but if felt that way at the end, as St Vincent’s looked uncomfortably out of sorts. After each of their five Dublin titles since 1984 they added the provincial title as well. Manager Brian Mullins had similar ambitions this season, only to discover Rathnew had other ideas.

Still Rathnew have been here before, done this: they famously beat Na Fianna to win the 2001 Leinster title, and three members of that team – James Stafford, Leighton Glynn and Damian Power – delivered a special reprise here.

Stafford closed out the game with 1-2, his goal on 57 minutes deftly set up by Ross O’Brien, brilliantly fetched then finished; Glynn played a captain’s role with two points from play, while Power did an excellent marking job on Dublin star Diarmuid Connolly, who scored only one free over the hour and never threatened much more either.

“I was just thinking the same as any other one, rattle it in,” Stafford said of his goal, the big midfielder giving Michael Savage no hope in the St Vincent’s goal. “If it comes off it does, if it doesn’t it doesn’t. But they have to be scored, don’t they?

“And without being big-headed, we didn’t fear St Vincent’s. We saw from the draw, the All-Ireland champions of 2015 coming to Aughrim, so we did respect them, but no fear, no, and knew if we were in it for the last 10 minutes. Maybe it’s Rathnew’s spirit. Or pure ignorance. I don’t know.”

Those last 10 minutes is exactly where the game was won: club veteran Mossy Quinn looked to have given St Vincent’s the last advantage with his goal on 45 minutes, putting them 1-9 to 0-10 in front, but that turned out to be their last score of the game, as the Wicklow men dominated from there until the end.

“We’re ecstatic to get the win, but I wouldn’t say surprised,” said Glynn, the Rathnew captain, who at 35 has now won 20 Wicklow titles, between football and hurling. “We had a good look at them, it’s good these days because you can see all these games on TV, and we thought that in Dublin teams probably paid them a bit too much respect, played a bit too defensively.

“We just said we’d go man to man, try to get our runners on the ball and try to create some chances. Look, a lot of stuff worked out for us today that on another day mightn’t. The bit of luck when you try hard seems to come.”

Glynn singled out Stafford’s goal for praise: “As soon as I seen the ball going in I said, ‘we’re going to get a goal here’. He’s done it so many times. So yeah, it’s just a ploy we use every so often.”

And what about those odds? “Yeah, written off by everyone, bar ourselves. But we didn’t give Vincent’s time to relax, got at their defensive setup fairly quick.”

Indeed Connolly wasn’t the only one they handled: Ger Brennan couldn’t get his usual grip in defence either, and while Shane Carty, Enda Varley and Gavin Burke also contributed points in the first half, Rathnew played them out of the game for much of the second half.

No one from St Vincent’s made themselves available for comment, and it’s Rathnew who waltz on to play Kildare champions Moorefield in the semi-final on Sunday week.

“We felt if we played as well as we could possible play, we could give them a good go,” said Rathnew manager Harry Murphy, a veteran on both the club and county scene. “And that second half performance was as good as we’ve ever played.”

“I don’t think we could have played much better. We started a bit nervously, gave them some chances early on. Our handling wasn’t great. But in fairness, second half, they put in a masterful performance. We knew we’d have to do that. We knew we wouldn’t beat a team, with the calibre of footballers they have, playing in fits and starts.”

So they saved their best until last, and by then St Vincent’s had no reponse. It throws the provincial championship wide open, and for Glynn and five others on the team, the chance to bookend 2001:

“We’ll enjoy it but our ultimate aim is to win Leinster,” said Glynn. “Every team that’s left in now thinks they have a chance.”