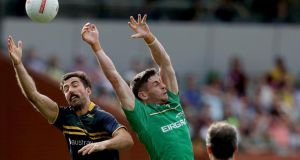 Kerry All Star Paul Geaney in the air with Australia’s Kade Simpson during the first Test between Ireland and Australia at Adelaide Oval, which the home side won. Photograph: Tommy Dickson/Inpho

International rules isn’t the easiest of sports to break into. Precedent indicates that experienced players do best but there’s no opportunity to gain experience anywhere except at the top level.

Two of the best known debutants in this series are Kerry All Star Paul Geaney and Cavan captain Killian Clarke. They were viewing proceedings form different parts of the field on Sunday in Adelaide with the latter in the corner back slot and the former in attack.

Was it what you were expecting?

PG: “I suppose from the videos it was. It’s different in the heat that was there and the way they played did confuse us a bit. It’s hard to communicate in that heat out there when you’re not used to it and it was tough going all right but I think we learned a lot.”

KC: “It was tough work. We’re probably still adjusting to the heat a wee bit, and that was the hottest day we’ve had so far. It’s a disappointing result overall.

“Personally, I felt the heat a wee bit strong and trying to get my breath a wee bit more than others. Next week’s a different story. We’re after being exposed to the heat now and the pace of the game. The Aussies move the ball very well, their kick passing was better than expected, which was hard to defend. We’ll give it a good rattle next week.”

Australia goalkeeper Brendon Goddard attracted rave reviews for his impersonation of a position he’s never previously played. A combination of a sweeper, last line of defence and net minder, his last-ditch interventions prevented goals on a couple of occasions. The home team’s willingness to sweep out of defence and leave the goal unscreened created plenty of opportunity.

Was it surprising or hard to counter that tactic?

PG: “It didn’t take me by surprise because they did the same thing two years ago in Croke Park. Maybe not to the extent they did it this time but he’s a new keeper and probably less inclined to sit in the goals.

“What they did was basically to push up the field and marked territories and put pressure on balls so they were able to move zones and defend that way. Then when we pushed out it allowed them time to filter back and it was impressive. For guys who only came together during the week, it was very professional.

KC: “The Aussies played a funny game where they left the two boys free and the goalkeeper was playing as a sweeper. It didn’t work out the last time for them in Croke Park, they were caught out a lot, but it paid a bit of dividends this time. A few balls over the top, the ‘keeper was out like a shot. We’ll have a look and see if we need to tweak our tactics a little bit to adjust to what they’re bringing to the table.”

For both Geaney and Clarke there is the opportunity that for the first time in three series there is a second Test in which to put all the lessons to good use.

What will you hope to do better?

PG: “Just try and play closer to goal next week, hopefully. Just the way things panned out in this game just gone, I had to push out a small bit more and they really pressed from the back when they got the ball. They had three runners straight off.

“We tried to leave two [players] inside and it just wasn’t working. We probably have to change that up a small for next week but we’ll see. I’ll try and get in closer to go faster maybe when we get it but it’s vital that we get our marks and progress up the field to match that. It’s going to be exciting.”

KC: “They’re probably just better at the tackle – in evading our tackles, and also wrapping up a few of our lads. You could see them getting away from lads around the middle a lot easier than we were. They could run into traffic and two hand-passes, they were out into space and had an easy kick-pass inside then. We’ll work on it this week. We’ll look over the video analysis and tweak a few things for next week.”