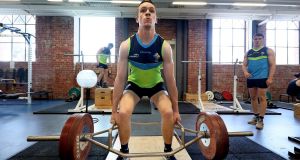 It’s likely that if Kevin Feely wasn’t on Joe Kernan’s radar before this year’s Leinster final, he certainly was afterwards. As Kildare battled with Dublin, Feely’s ability to take high ball in the centrefield area against once and future All Stars Brian Fenton and James McCarthy attracted very positive attention.

That exhibition as well as the Athy player’s ability to kick the ball made trials and selection all the likelier.

“For me, the most appealing aspect of it is the skill level required,” says Feely. The level of kick-passing you have to reach to be good in this game is far beyond what you get in Gaelic football because if your pass is off or if a ball bounces when it’s not meant to bounce the receiver ends up under serious pressure.

“In that sense, the six weeks has brought on this squad’s kick-passing a huge amount and then your handling has to be spot-on as well. The skill required exceeds what you’d expect from Gaelic football.”

Ironically, now that he’s in Australia he’s travelling a well-worn path from Kildare, which has supplied a number of recruits for AFL clubs and yet that was never on his radar, as a promising soccer player.

“I’ve spoke to Daniel [Flynn] and Paddy [Brophy] and then obviously you had Seán Hurley and even my younger brother [Rory] has had a bit of interest as well so it’s been nice to chat to them about what to expect.

“The biggest thing they say they had to adjust to was the athleticism and the physicality and we’ve been made aware by the lads who have played this game that athletically it exceeds anything they had experienced playing Gaelic football so I think that is going to be the biggest challenge – can we match them athletically and for speed and power? As long as we’re on the ball with our own skills, that’s where we can be competitive.”

On the county front it hasn’t been a bad year. Kildare were promoted back to Division One and gave Dublin their closest challenge in all of the Leinster champions. There will be pressure next season, having to compete at the top of their game against the best sides in the country and next summer the All-Ireland quarter-finals will be played on a round-robin format.

“Massive season,” he agrees. “We’ve started meeting up as a squad the last few weeks and just chatting to the boys there’s no one who’s not delighted that the season is coming around again.

“There’s nobody still tired from last season. There’s excitement to be among the top eight counties in the country for the league and we’re really going to embrace this challenge and we have massive ambitions to be competitive in that division and we’re hoping the regular games against top opposition will bring us on for the championship.

“We’ll hopefully be able to get over some of the areas of our game that let us down last season. It’s a huge season for Kildare and we’re massively looking forward to it.”