GAA and AFL eye staging international rules Test in US 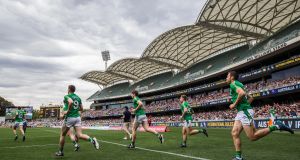 Ireland make their way on to the pitch for their first Test against Australia this year in Adelaide. Photograph: Tommy Dickson/Inpho

GAA director general Páraic Duffy believes the immediate future of the international rules series is secure. Speaking on the weekend that saw Ireland defeated in the first Test of this year’s series, he said: “I think we will reach agreement for a longer term. There’ll be no problem with that.”

Duffy, whose 10-year term as director general concludes in March 2018, also disclosed that the GAA and AFL are looking at the possibility of staging one of next year’s Tests in Philadelphia.

This is driven by the AFL desire to use the international series as a promotional tool to raise the profile of their own game in the United States where the GAA already has a significant presence.

“They’re very keen on going to the States so we’re going to push hard on that and see if it’s possible. The whole issue has been getting a venue in the US because of the size of American football pitches but there are a couple of things we’re going to explore and we said that we’d try and tie this down before February.

“One of the possibilities – and it’s not ideal – is Philadelphia . . . The University of Pennsylvania – Franklin Field – is being suggested and I’m actually going to be in Philadelphia the week after next so I’ll take a look.”

He added, however, that a decision had yet to be taken that a Test would definitely be staged in the US. Ireland is due to host next year’s series and the Test in America would be one of those two and not a third event.

“It’s not decided because we have to get a venue first but we’ll finalise it by February. There’s no question of whether they want this to continue.”

Duffy’s assessment of the immediate health of the series, which has staggered over the past 10 years between apparently imminent demise and faltering signs of recovery, is based on the positive feelings coming from the AFL. There hasn’t always been such certainty about the Australian attitude.

“It might have been a question seven or eight years ago but not anymore. Their players have bought into it. They’re very happy that it’s the All-Australians and they want it to continue so there’s no question of it not going ahead. Gillon’s [McLachlan, CEO of the AFL] attitude has made that very clear.

“They feel they’ve cracked the issue of players and who plays. The fact that it’s All-Australian now and that the elite players are selected means they’re very happy with that.”

McLachlan’s stewardship of the AFL has been crucial to the steadying of relationships with the GAA, which had become a bit frayed during the tenure of his predecessor Andrew Demetriou. Crucially, the engagement of the players has also greatly strengthened the prospects of long-term success for the series.

“They [the AFL] say the players want it to continue as well,” according to Duffy, “and at the dinner last night the atmosphere was excellent and the speeches reflected that”.

He was asked did the absence of Dublin players not suggest that the series was becoming a harder sell back at home just as Australian attitudes were warming towards it.

“I don’t think it’s a harder sell and I don’t want to comment on the Dublin players but there are no [AFL Premiership champions] Richmond players either on the Australia team. The main reason we’re short of some players is because of club fixtures. That’s been the biggest issue and we have to accept that.

“The timing isn’t ideal for either of us but it works fairly well and I think the enthusiasm is still there among our players.”

He added that previous anxiety over the migration of players from Ireland to the AFL had settled after the abolition of the junior series. Those playing in the senior series are effectively too old to make the move and none of them have to date.

“There was concern a number of years ago about the player talent drain to Australia until people realised you lose a couple of players and that’s it. That’s going to happen anyway and people realise that there’s no relationship between the series and people going to play in Australia.”