Cavan’s Mickey Graham: ‘This is 100 per cent bonus territory for us’ 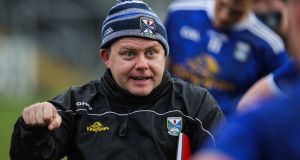 Cavan manager Mickey Graham: “We’re just delighted to be still playing football at this time of year. They’re only seven teams left in the country, Cavan are one of them.” Photograph: Inpho

Mickey Graham has already earned a subtle reputation for orchestrating minor miracles on the football field, and he sounds well pleased with the latest one.

With the score, the odds, the incentive and whatever else stacked against them, his Cavan team came from 1-9 to 0-2 behind, just before half-time, to beat Down by a single point in last Sunday’s Ulster football semi-final. No one and everyone can say they saw it coming.

Because this sort of hide-and-seek tactic has served Graham particularly well, as long as it works of course. Cavan produced a similarly spirited comeback to beat Monaghan in the Ulster preliminary round, when no one saw them being beaten, and they also took the second half of their semi-final win over Antrim by the scruff of the neck.

“In fairness the lads just had a wee chat amongst themselves,” says Graham. “There was no panic, they just realised they weren’t doing a lot of things they should have been doing, were letting themselves down. As a management team we just said if this is our last 35, 40 minutes of the year, let’s just play with some pride, really go for it. When you’ve nothing to lose, it’s knockout football, let’s have no regrets.

“We threw some caution to the wind, made some adjustments and pushed a few lads up the field. Sometimes those things don’t pay off, and this was just one of those days it just about worked.”

Pádraig Faulkner, Thomas Galligan and half-time replacement Conor Madden were all immense, Cavan also pinching 10 of Down’s 12 kick-outs as they pressed ever higher. A small part of this minor miracle is that it landed Cavan in back-to-back Ulster football finals for the first time since 1969.

Last year, when they also faced off against Donegal, it was their first final appearance since 2001, when Graham came off the bench in the narrow defeat to Tyrone. They haven’t won the Ulster title since 1997, Graham also part of that team, and it’s come after two successive relegations in the league, to Division 2 last year, more recently to Division 3.

“That was the just the situation we found ourselves in,” admits Graham. “First and foremost, we were just delighted to be back playing football. When we did come back, we just said we’d take it one step at a time, try to consolidate our Division 2 status. Unfortunately we didn’t get the results we needed, but still felt we were learning along the way.

“After that it was all about Monaghan. That’s all you want from the players, just go out and give it a right go, playing with a bit of freedom, and expression, which they showed that day too.

“In fairness they were doing that in a lot of games this year, even when results weren’t going our way. But I feel the lads know now there is a wee bit of resilience there, because this isn’t the first time they’ve been able to get a result from a nearly impossible position. And look, Cavan have suffered some heavy defeats down through the years, and if anything that has made them a bit more mentally tough, that they know how to give it everything when they do go out.”

A quick glance through Graham’s orchestral CV reveals ample evidence of teams knowing how to give their all: from winning a county intermediate title in 2006 with Drumalee, a small club on the outskirts of Cavan town, to the historic Leinster football title with Longford club Mullinalaghta, in 2018.

Sunday’s showdown against Donegal is a different proposition. Cavan held up reasonably well last year in Graham’s first season as manager, losing 1-24 to 2-16, but this Donegal team, contesting their ninth final in 10 years and seeking a sixth title in that periods, are viewed as the only contenders remaining to Dublin’s All-Ireland crown.

Still a large part of this miracle is that in the depths of the pandemic winter Cavan are still out there. Graham’s work with Coca-Cola has him on the road meeting [from a social distance] some of the county supporters, and some of them still can’t believe it.

“At the start of this championship, if you came out and said Cavan were going to be in an Ulster final, people would laugh at you. So this is 100 per cent bonus territory for us, in an Ulster final, coming up against probably the second best team in the country. They’re a formidable outfit, we’re under no illusions about that, the challenge that lies ahead.

“We’re just delighted to be still playing football at this time of year. They’re only seven teams left in the country, Cavan are one of them. And if there is anything to take out of this, it’s given people something to look forward to at weekend. Especially Cavan people, they’ve been sitting at home at weekends, with nothing to do. I’ve been moving around, and the amount of people saying to me they’re so excited to have something to look forward to again this weekend.

“Even dropping the young child to school this week, the excitement in their faces, they need it as much as we do. They can’t go anywhere beyond school. And if it can inspire the next generation of young footballers in Cavan in some small way that will be a success in itself.”