Cavan into Ulster final after stunning Down comeback 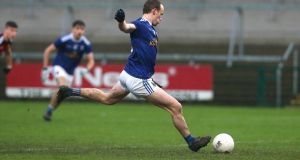 Cavan advanced to their second Ulster final in a row when they came from 10 points down to defeat Down by a single point in an extraordinary comeback.

The Blues haven’t been in back-to-back Ulster finals since 1969 and when they trailed by 1-9 to 0-2 just before half-time, the big day seemed further away than ever.

But a remarkable turnaround after the break saw them pull three clear before holding on, with Padraig Faulkner, Thomas Galligan and half-time sub Conor Madden immense.

Cavan pinched 10 of Down’s 12 kick-outs with an effective high press in place which routed the Mourne men.

“People are probably sitting at home and turned to another channel to watch the Connacht final at half-time. The way we were performing was just not good enough,” admitted winning manager Mickey Graham after the game.

“We were tired, we had no energy, no work rate, made lots of simple errors. It was a calamity, that first half, to be honest.

“We seemed to let them get runners all over the field and to be in trouble in lots of areas. We made it very easy for Down but thankfully half-time came and we were able to regroup.”

Jerome Johnston kicked five points in the first-half and Ceilium Doherty bagged a goal as Down led by 1-5 to 0-1 at the first water break. Cavan had looked to target midfield but in tough conditions, Down were dominant in the ground battle for breaks.

Two points just before the break from Faulkner and Gearoid McKiernan (free) cut the gap to a more manageable seven but the Breffni men were still facing an uphill battle.

However, the brilliant Madden got them going with a couple of spectacular points on the restart and a penalty from veteran Martin Reilly cut the gap. There was four in it at the second water break and Cavan pushed on as Paddy Tally’s men missed a number of chances.

“It’s devastating,” said Tally. “From such a really strong position at the end of the first half to losing the game by a point is very, very tough.

“We created at least one or two goal chances in the second half, one of those would have swung the momentum back in our favour again. But we couldn’t take our point chances, every time we missed one they seemed to go down the other end of the field and score one.

“We couldn’t get a foothold again in the second-half. But you have to give it to Cavan, they dominated the midfield on the kick-outs. We couldn’t get enough possession.

“It [the penalty]was a very controversial call, it was made by the umpire. I’ve never actually seen that before. Linesmen don’t make calls, umpires don’t make calls. That’s not within the rules.”

Late scores from McKiernan (free), Killian Clarke and Galligan saw Cavan move three ahead before they managed the clock well to hold on for a win by the minimum.

“We were in a bad situation,” said Graham, “and we said if this is going to be the last 35 minutes of the year, let’s go down fighting. There was no point getting back to within three or four points and being happy with a moral victory. We were brave, we pushed up and Padraig [Faulker] going to the middle of the field gave us a platform and Conor [Madden] coming in gave us an extra outlet and caused panic for them.”