Eamon Donoghue: Conor Loftus adds a lot at midfield just not under kickouts 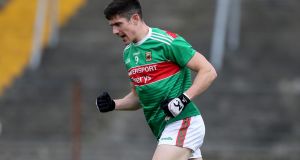 Mayo’s decision to play Conor Loftus at midfield is one of the most unusual since the return of intercounty football last month.

James Horan’s new-look team have averaged 2-19 in their three matches over the past three weekends; a 15-point league win over Galway, a one-point league defeat to Tyrone and an 11-point championship victory in Leitrim.

The deployment of Loftus at No 9 has been a key ingredient in a more varied attack, however his physical limitations in the position represent a major gamble for the Mayo management.

Mayo’s first point since the resumption came via Loftus – a surprise selection at midfield for the trip to Tuam Stadium, the Crossmolina clubman has played every minute thereafter.

A graduate of the Under-21 All-Ireland winning team of 2016 – scoring two goals in the decider from centre forward – Loftus usually competes for a slot in the Mayo full forward line. He's also featured in the half forward line, making three championship appearances in 2019 between the two. Scoring 1-6, five of which from frees, in his two starts against Down and Armagh.

In the past three games however, operating in the middle of the park, he’s scored 1-4. All of which from play or marks. It’s the sort of form which sees him nailed on to start Sunday’s Connacht semi-final against Roscommon.

Loftus has also assisted 1-4 in those three matches and caught two marks. Not bad considering he looks barely 6ft and has been by far the most lightweight of the four midfielders in each fixture.

The win over Galway demonstrated all that the 23-year-old brings to this Mayo team in his new role, he enjoyed 16 possessions either scoring or assisting a score for six of them. So that’s 38 per cent of the times he got on the ball he converted himself or gave the final pass for a Mayo score.

So while Mayo may finally be constructing a top class attack, they could also be about to lose a midfield battle they had taken for granted for so long

A rarity in this Mayo team, Loftus plays with his head more so than his heart. Short of being a playmaker who sprays passes like his coach and club mate Ciarán McDonald once did, he plays with his head up and joins the dots with deliberate distribution by foot or hand. Offering a different gear of attack to the usual off the shoulder intensity that Mayo’s game has been built upon over the past decade.

Operating out the field he has relished the extra time and space afforded, preferring to stay behind the play as an out ball or to drift between the lines to engineer scores. Against Tyrone he enjoyed 17 possessions, and for five of those he was involved in a Mayo score, although in Castlebar that day he only managed one point (and no assists). Whereas against Leitrim he was at his most involved with 24 possessions, including a terrific point from distance and the final pass for a further 1-1.

Mayo have been refreshed this year by the introduction of young talent such as Oisín Mullin, Tommy Conroy, Eoghan McLaughlin, Bryan Walsh, Ryan O’Donoghue and Jordan Flynn, however the repositioning of Loftus, moving Aidan O’Shea to full-forward, and the addition of Mark Moran at centre forward has also allowed for a change of style.

Mayo can still attack at pace through the heart of the opposition defence, but they can now turn the dial from short to long with Moran the main conductor and O’Shea the focal point inside. Linking things between those lines, and offering a contrast in speed and direction out the field, is Loftus. Still growing in confidence in the position and beginning to demand the ball, on 20 occasions in three matches he has been involved in the attacking move for a score - that's 34 per cent of his possessions. As midfielders go, that equates to quality over quantity.

The flipside to all of this though is – Loftus may be very mobile, diligent and have excellent basic skills – but he is not a natural midfielder. This is made obvious by the fact that in two out of the three matches goalkeeper David Clarke did not aim a single long kickout in his direction. Against Tyrone he kicked long in his direction once, resulting in an opposition mark.

Mayo may have a far more varied attack this year, but with seasoned big men such as Seamus O’Shea, Tom Parsons and Aidan O’Shea out of favour in that sector their long kickout targets are now down to two – Matthew Ruane and Diarmuid O’Connor – and the impact it’s having is clear to see.

Mayo have retained only 76 per cent of their kickouts combined in their last three outings – and that’s despite winning 13 of 14 in last weekend’s win against a Leitrim team who retreated and conceded it short. It drops to 71 per cent retention for the two league games.

Mayo’s short kickout is under more pressure, as for their longer kickouts: they have won only 53 per cent of them. Not only are their options reduced and predictable beyond their 45, but their physicality under the breaking ball has fallen off too.

Loftus’s two marks both came under opposition kickouts – although this is an area in which he has struggled.

He breaks the ball well for his size but Galway targeted his zone on 10 occasions and won possession with six of them. They isolated him in a one-on-one situation against Tom Flynn on three occasions in the second half, and the Galway midfielder won two dominant marks. While Cein D’Arcy easily won another one-on-one aerial duel. Yet, despite some glaring physical mismatches, they targetted him only four times in all.

Tyrone, as is the case with most teams in the modern game, favour the short kickout but in the one instance they isolated Loftus against Brian Kennedy the latter came away with possession. While against Leitrim he was under six contests in total with Mayo only winning the ball twice. He was forced into a foul another two times, while for the large part Leitrim bossed the battle for breaking ball in awful conditions. An area Mayo typically excel in.

Even with Ruane trying to reach every contest, Mayo have still lost 56 per cent of the opposition's long kickouts over three matches, against teams who would not be renowned for their midfield dominance. Last time out Leitrim kicked 18 long and won 13, a key factor in them remaining competitive for a good stretch of that match.

But since the resumption, no team has as of yet ruthlessly bombarded Mayo’s converted midfielder, and no team has purposefully gone after the Mayo restart to force them long consistently.

It’s been many, many years since Roscommon had a chance of coming out on top in the midfield battle against Mayo. To do so this weekend they have to put Loftus’s aerial ability to the test and hope he fails. Albeit to kick the number of long balls required to really put Loftus and Mayo under pressue will be a gamble in itself.

Successive Roscommon management teams have hoped a Cathal Compton and Tadhg O’Rourke partnership would be the solution to their own midfield issues - the duo have played together right through the grades but Compton's injury record has held him back at senior level. Sunday presents a big opportunity for them to deliver on those expectations.

So, while Mayo are finally constructing a top class and balanced attacking gameplan, they could also be about to lose a midfield battle they had taken for granted for so long against their Connacht rivals. Will the price of conceding the middle ground prove too great, or will Mayo’s midfield experiment continue to pay off?