US pulls out of key nuclear arms control pact with Russia 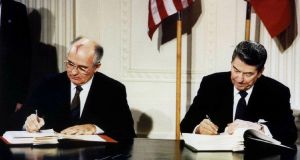 The US has withdrawn from a critical 1987 nuclear arms control treaty with Russia after Moscow refused to destroy a new intermediate-range missile that Washington and its Nato allies said violated the cold war-era pact.

US president Donald Trump withdrew from the Intermediate-Range Nuclear Forces Treaty on Friday, six months after the US told Russia that failing to destroy its SSC-8 cruise missile would spark the collapse of the treaty.

Mike Pompeo, US secretary of state, said Russia was “solely responsible” for the demise of the pact, which was signed by Ronald Reagan and Mikhail Gorbachev at the White House more than three decades ago. The INF was a landmark treaty that paved the way for a number of arms control pacts between the US and then Soviet Union.

The US spent six years urging Russia to return to compliance with the INF after the Obama administration first raised concerns about the SSC-8 missile, which Washington says has now been deployed in western Russia.

“Over the past six months, the US provided Russia a final opportunity to correct its non-compliance. As it has for many years, Russia chose to keep its non-compliant missile rather than going back into compliance,” Mr Pompeo said.

“Russia’s non-compliance under the treaty jeopardises US supreme interests as Russia’s development and fielding of a treaty-violating missile system represents a direct threat to the US and our allies and partners.”

Lori Esposito Murray, an arms control expert at the Council on Foreign Relations, said Russia was to blame for the outcome but stressed that the collapse of the INF could return Europe to the “hair-trigger instability” of the 1980s.

“This really is a crossroads in terms of what is going to happen with these nuclear systems. Right now the best hope is to hold the line and keep [current] reductions in place while we try to figure what happens next,” she said.

António Guterres, UN secretary general, said the demise of the INF meant “the world will lose an invaluable brake on nuclear war”. It banned nuclear and conventional missiles with a 500-5,500km range, cutting the threat that the Soviet Union and now Russia or the US could fire missiles that would hit their targets in less than 10 minutes.

European members of Nato have swung publicly behind the US decision, but they have also warned against a new arms race between east and west on the continent. There are also fears over whether the US and Russia will be able to extend the New Start agreement on cutting nuclear warheads that comes up for renewal in 2021.

The collapse of the INF treaty comes 17 years after President George W Bush abrogated the Anti-Ballistic Missile treaty, as his administration pushed ahead with plans to install a missile defence shield in Europe. Russia has denied US accusations that the SSC-8 missile violates the INF treaty. It says that the US deployment of missile defence capabilities in eastern European states breaches the pact – an argument that Washington denies.

The demise of the INF also comes as Tehran takes steps to breach the 2015 Iran nuclear deal following the decision by Mr Trump in May 2018 to withdraw from the landmark agreement. Mr Trump’s efforts to convince North Korea to abandon its nuclear programme have also run into big obstacles as Kim Jong-un, the North Korean dictator, shows few signs of being willing to following through on his 2018 pledge to denuclearise the peninsula.

European diplomats say most EU countries would be in range of the new missiles that Russia has deployed in the west of the country. A senior US official said the missiles could target the entire territory of western Europe.

Europe may now face an uncomfortable choice over whether to host extra US missiles in response to the Russian moves. Deployment of US nuclear weapons in the 1980s triggered public protests in several European countries.

Bruno Lété, a security expert at the German Marshall Fund of the United States, said Europe was again at “risk of being back in the line of fire – and left to suffer the consequences in case of a crisis”.

“The fact that great powers no longer see eye to eye on mid-range cruise missiles will undoubtedly raise questions about the future of New Start and other arms treaties,” he added.

A senior US official said the Pentagon was preparing to conduct a flight test of a conventional [non-nuclear] cruise missile that would be fired from a mobile launcher. He said the Pentagon had “undertaken treaty compliant research on non-compliant systems” but that the end of the INF would allow the Pentagon to start testing the missile. But he added that the US was “years away from having an effectively deployable capability”.

US officials said Mr Trump wanted to work with Russia and China to craft a trilateral arms control pact that would address nuclear-armed missiles of all ranges. One official said the president had raised the issue with both Chinese president Xi Jinping and Mr Putin when the leaders met on the sidelines of the G20 summit in Osaka in June. Beijing has given no positive response so far and many analysts doubt it would be interested.

Mr Pompeo said Mr Trump had tasked his administration “with beginning a new chapter by seeking a new era of arms control that moves beyond the bilateral treaties of the past” and added that America “calls upon Russia and China to join us in this opportunity to deliver real security results to our nations and the entire world”. – Copyright The Financial Times Limited 2019