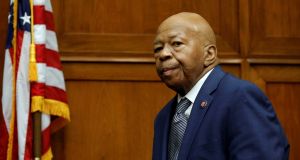 US president Donald Trump has attacked a majority-black district represented by a congressional nemesis as a “disgusting, rat and rodent infested mess”, broadening a campaign against prominent critics of his administration that has exacerbated racial tensions.

Mr Trump lashed out in tweets against Representative Elijah Cummings, the powerful House oversight committee chairman, claiming his Baltimore-area district is “considered the worst run and most dangerous anywhere in the United States”.

It was the president’s latest assault on a prominent politician, and the people he represents, two weeks after he sparked nationwide controversy with tweets directed at four congresswomen.

His comments against Mr Cummings, who leads multiple investigations of the president’s governmental dealings, drew swift condemnation from Democrats, including would-be presidential rivals.

Statements from a spokesman for the state’s Republican governor and from the lieutenant governor defended Mr Cummings’s district and its people.

Mr Trump called Mr Cummings a “brutal bully” after his public tongue-lashing of top homeland security officials over conditions for migrants detained along the southern border.

Mr Cummings replied directly to Mr Trump on Twitter, saying, “Mr. President, I go home to my district daily. Each morning, I wake up, and I go and fight for my neighbors. It is my constitutional duty to conduct oversight of the Executive Branch. But, it is my moral duty to fight for my constituents.”

So sad that Elijah Cummings has been able to do so little for the people of Baltimore. Statistically, Baltimore ranks last in almost every major category. Cummings has done nothing but milk Baltimore dry, but the public is getting wise to the bad job that he is doing!

There is nothing racist in stating plainly what most people already know, that Elijah Cummings has done a terrible job for the people of his district, and of Baltimore itself. Dems always play the race card when they are unable to win with facts. Shame!

Mr Cummings has also drawn the president’s ire for investigations touching on his family members serving in the White House.

On Thursday, his committee voted along party lines to authorise subpoenas for personal emails and texts used for official business by top White House aides, including Ivanka Trump and her husband, Jared Kushner.

After spending several hours on his private golf course in Virginia, Mr Trump repeated the attack on Mr Cummings, despite broad criticism from Democrats.

“Elijah Cummings spends all of his time trying to hurt innocent people through ‘Oversight,’” Mr Trump tweeted. “He does NOTHING for his very poor, very dangerous and very badly run district!”

On Sunday, Mr Trump reiterated his criticisms saying it was obvious Mr Cummings had done “a very poor job for his district” and hit out at Democrats who “always play the Race Card, when in fact they have done so little for our Nation’s great African American people.”

House Speaker Nancy Pelosi defended Mr Cummings on Saturday as “a champion in the Congress and the country for civil rights and economic justice, a beloved leader in Baltimore, and deeply valued colleague”.

She added: “We all reject racist attacks against him and support his steadfast leadership.”

The Baltimore Sun editorial board wrote a strongly-worded article about the comments, saying Mr Trump was the “most dishonest man to ever occupy the Oval Office” on Saturday.

In a scathing column, the editors of one of the country’s oldest newspapers wrote that Mr Trump himself had more power to affect immediate change in Baltimore than Cummings does, who Mr Trump also targeted for criticism Saturday, and urged him to use the power of the presidency to affect positive change.

They wrote that it was “better to have a few rats than to be one”.

Baltimore mayor Bernard C “Jack” Young fired back at Mr Trump after his attacks, saying he was a “disappointment to the people of Baltimore, our country, and to the world”.

“It’s completely unacceptable for the political leader of our country to denigrate a vibrant American City like Baltimore, and to viciously attack US Representative Elijah Cummings a patriot and a hero,” Mr Young said in a statement.

A spokesman for Maryland governor Larry Hogan, a Republican, defended the area and its residents.

In an email, Michael Ricci wrote: “Baltimore City is truly the very heart of our state, and more attacks between politicians aren’t going to get us anywhere.”

Lieutenant governor Boyd Rutherford, also a Republican, tweeted: “Mr. President, realDonaldTrump, I have substantial policy differences with Congressman RepCummings. However, I hope your criticism is not directed at the many good and hard working people who live in the district.” – AP