The Kennedys: a family haunted by tragedy, misfortune and controversy 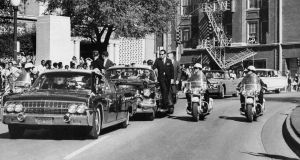 US president John F Kennedy’s hand reaches toward his head within seconds of being fatally shot as first lady Jacqueline Kennedy holds his forearm as the motorcade proceeds along Elm Street past the Texas School Book Depository in Dallas in November 1963. Photograph: James Altgens 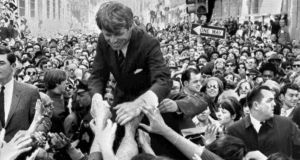 Robert Kennedy shakes hands with people in a crowd while campaigning for the Democratic party’s presidential nomination on a street corner, in Philadelphia. Photograph: Warren Winterbottom

The Kennedy family is one of the most visible in the United States, and has encountered a series of misfortunes. The following is a chronology of the accidents and deaths in the family:

1941 – Rosemary Kennedy: Daughter of Joseph and Rose. Institutionalised since 1941 because of an intellectual disability and failed lobotomy.

1968 – Robert Kennedy: President’s brother, assassinated in Los Angeles on June 5th. He was 42.

1969 – Edward Kennedy: Brother of John and Robert, drove a car off a bridge on Massachusetts’s Chappaquiddick Island on July 18th, after a party. Aide Mary Jo Kopechne was later found dead in submerged car.

1973 – Joseph Kennedy: Son of Robert and Ethel. Involved in car accident that left a female passenger paralysed for life.

1973 – Edward Kennedy Jr: Son of Edward and Joan. Right leg amputated in because of cancer.

1984 – David Kennedy: Son of Robert and Ethel. Died of a drug overdose in a hotel near family vacation home in Palm Beach, Florida.

1986 – Patrick Kennedy: Son of Edward and Joan. Now a Congressman, sought treatment for cocaine addiction as a teenager in 1986.

1997 – Michael Kennedy: Son of Robert and Ethel. Accused of having affair with his family’s teenage babysitter. Killed on New Year’s Eve in a skiing accident at Aspen, Colorado. He was 39.

1999 – John F Kennedy jnr: Son of the president, he was killed in 1999 when the airplane he was flying crashed into the Atlantic Ocean off Martha’s Vineyard; his wife and sister-in-law were on board and were also killed.

2019 – Saoirse Kennedy Hill: Granddaughter of Robert Kennedy and daughter of Courtney Kennedy Hill. The 22-year-old found dead on August 1st after suffering an apparent overdose at the Kennedy compound in Hyannis Port, Massachusetts.