Focus on Biden and Harris as Democrats gather for second debate 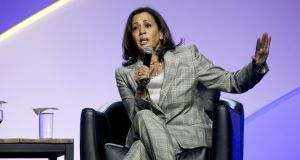 California senator Kamala Harris speaks during a presidential candidate forum in Detroit on July 24th, ahead of this week’s debates. Photograph: Anthony Lanzilote/Bloomberg

Democratic presidential hopefuls have gathered in Detroit, Michigan, for the party’s second round of debates as it seeks a candidate to challenge Donald Trump for the presidency next year.

The debates will take place over two nights at Fox Theatre, with ten candidates taking to the stage on Tuesday evening and the remaining ten on Wednesday. Candidates were obliged to meet two thresholds – achieve at least one per cent support in three polls, and secure at least 65,000 individual donations.

As with last month’s debate in Miami, the second night is likely to be the most high profile of the two. Former vice-president Joe Biden and California senator Kamala Harris, whose interchange was the defining moment of the first debate, will again appear on the same debate stage, this time alongside New Jersey senator Cory Booker.

Tuesday night is likely to be dominated by Elizabeth Warren and Bernie Sanders, who will be standing side by side on stage. The two have similar left-wing policies and are likely to be probed on their stances on issues such as healthcare, education and tax.

Biden’s team has indicated that he is likely to take a more combative approach in the second debate. “I’m not going to be as polite this time,” he said last week.

Speaking immediately after last month’s debate, in which he failed to give an adequate response to direct criticism from Harris about his record on the issue of race, Biden said: “I was prepared for them to come after me, but I wasn’t prepared for the person coming at me the way she came out,” noting that Harris had been a friend of his son, Beau, who died from cancer in 2015.

Booker – who along with Harris is the only other African-American candidate in the field – has also hinted that he will challenge Biden during the debate. He criticised Biden’s criminal justice plans last week, prompting the former vice-president to lambast Booker’s record as mayor of Newark, claiming that his police department embraced a stop and frisk policy that disproportionately affected African-American men.

Despite his poor performance during the first debate in Miami last month, Biden remains the front-runner according to several polls, although he did suffer an initial dip in support.

A national poll by Quinnipiac released on the eve of the debates put r Biden at 34 per cent among Democrat and Democrat-leaning independent voters, with Harris on 12 per cent. Elizabeth Warren polled at 15 per cent, with Bernie Sanders on 11 per cent.

A poll from Fox News last week also put Biden ahead among Democratic primary voters with 33 per cent. Sanders was second with 15 per cent, followed by Elizabeth Warren on 12 per cent and Kamala Harris on 10 per cent.

Biden delivered a shaky performance at the Miami debate when he came under sustained attack from Harris over his record on race relations. Harris (54), a former prosecutor and attorney general in California, highlighted Biden’s previous opposition to “busing”, a policy designed to integrate America’s public schools, arguing that she, as a young African-American girl, benefited from the federal policy.

Harris saw a sharp increase in donations in the days immediately following the debate, solidifying her strong fundraising performance since the primary campaign started.

Indiana mayor Pete Buttigieg, who is scheduled to appear on Tuesday night, is the top performer in terms of fundraising, ratcheting up more than $24 million (€21.5 million) in donations in the second quarter. The 37-year-old war veteran has yet to break into double-digits in national polls, though he is widelyseen to have performed strongly in the first debate.

President Donald Trump has indicated that he is closely watching the evolving Democratic race. On Friday, he hit out at Fox News, typically his news channel of choice, for its polling showing a strong lead for Biden.

“Now new Fox Polls, which have always been terrible to me (they had me losing BIG to Crooked Hillary), have me down to Sleepy Joe,” a reference to the former vice president.

“FoxNews is at it again ... So different from what they used to be during the 2016 Primaries, & before – Proud Warriors!”