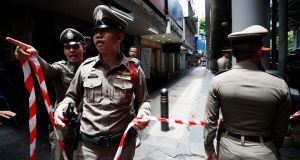 Thai police officers secure the area after a suspicious object was found, on Silom road in Bangkok on Friday. Photograph: EPA

Six small bomb blasts wounded at least four people in Bangkok on Friday, as the Thai capital hosted a Southeast Asian security meeting with top diplomats from the United States, China and other world powers.

Prime minister Prayuth Chan-ocha ordered an investigation into the bombs, a blow to Thailand’s image during the high profile event and barely two weeks after his former military junta transformed into a civilian government.

The first small explosions were heard during rush hour, just before 9am (3am Irish time), at two sites in central Bangkok. Further blasts hit a government complex hosting several ministries in the north of the city.

Three of those hurt were women cleaning the street when what police called a “ping-pong bomb” went off. Pictures on local websites showed them looking dazed and getting treatment from medics.

The other casualty was near the 77-storey King Power Mahanakhon building, one of the tallest in Bangkok. Police Colonel Kamtorn Uicharoen told Reuters a total of six bombs exploded. One was recovered before it blew up.

“My ears were ringing. The sound was so loud,” said motorcycle taxi driver Chokechai Prasongsan.

There was no immediate claim of responsibility.

“I would like to condemn those causing the situation which destroys peace and damages the country’s image,” Thailand’s prime minister Mr Prayuth said on Twitter.

In a message to the public, Mr Prayuth said: “A group of ill-intended people have recently incited violence while the government is propelling the country forward”.

He did not identify the group, but urged Thais to cooperate with security forces.

None of Friday’s blasts were very close to the regional security meeting venue. China’s top diplomat Wang Yi and US secretary of state Mike Pompeo are attending the forum.

Bangkok was last hit by a series of small bomb blasts in 2017. One man, a junta opponent, was jailed for planting a bomb that wounded 21 people at a hospital.

The city’s worst bombing was in 2015 when 20 people were killed in an attack for which two Chinese ethnic Uighur men were arrested.

A low level insurgency in the largely Malay Muslim provinces of Thailand’s far south has left nearly 7,000 people dead since 2004, but violence largely been confined to that region. – Reuters