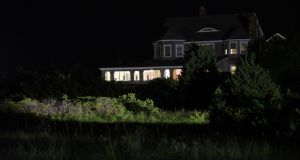 The Hyannis Port Yacht Club by the Kennedy Compound where police are investigating the death of Saoirse Kennedy Hill. Photograph: Reuters

Saoirse Kennedy Hill, a granddaughter of Robert Kennedy and daughter of Irishman Paul Hill who was wrongly convicted of the Guildford pub bombings, has died of a suspected drug overdose at the Kennedy family compound in Cape Cod.

Authorities were called to the property in Hyannis Port on Thursday afternoon.

“Our hearts are shattered by the loss of our beloved Saoirse,” the Kennedy family said in a statement. “Her life was filled with hope, promise and love. She cared deeply about friends and family, especially her mother Courtney, her father Paul, her stepmother Stephanie, and her grandmother Ethel.”

Ms Kennedy Hill’s mother was Courtney Kennedy Hill. She married Paul Hill shortly after his release from prison in 1993 after he spent 15 years behind bars having been wrongly convicted along with Gerry Conlon, Paddy Armstrong and Carole Richardson for the Guildford pub bombings. The couple separated in 2006. They lived in Ireland between 2002 and 2006, with Saoirse spending time in the country. Courtney Kennedy Hill was in Ireland as recently as May to launch an exhibition on Dot Tubridy, her godmother who had strong personal connections with the Kennedys.

At the time of her death, Saoirse was a student at Boston College where she was studying media and communications. The statement confirming her death noted her passion for human rights and empowerment, as well as her work building schools for indigenous communities in Mexico.

The 22-year-old had written about her battle with depression, and was politically-active, marching in the anti-gun demonstration “March for our Lives” last year.

The death of the grand-daughter of Robert Kennedy is the latest tragedy to befall the Kennedy family.

Her mother Courtney is the fifth of Robert and Ethel Kennedy’s eleven children. Robert Kennedy was assassinated in 1968, five years after the murder of his brother, John F Kennedy. The late president’s son John died in a plane crash in 1999 along with his wife and sister-in-law.

“The world is a little less beautiful today,” her grandmother Ethel said in the statement released by the family.