Trump refuses to retract Baltimore remarks amid claims of racism 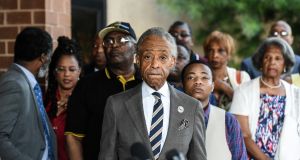 US president Donald Trump stood by his criticisms of the city of Baltimore and its political representatives on Monday, amid widespread criticism that his attack was racially motivated.

Mr Trump denounced Congressman Elijah Cummings, an African-American Democrat who represents Baltimore, on Sunday, describing the city as a “rodent-infested” place where “no human being would want to live”.

His characterisation was immediately denounced as racist by several Democrats including House Speaker Nancy Pelosi. It follows the president’s controversial comments about four non-white female members of congress earlier this month, when he told the women – all of whom are US citizens – to “go back” to the countries they come from.

On Monday, civil rights leader, Reverend Al Sharpton, became the latest figure to call out Mr Trump for his attacks on the black-majority city. Mr Trump’s comments were “bigoted and racist” Rev Sharpton said at a press conference in Baltimore.

Speaking alongside Michael Steele, the former Republican lieutenant governor of Maryland, Mr Sharpton said Mr Trump “has a particular venom for blacks and people of colour”.

“He attacks Nancy Pelosi, he attacks Chuck Schumer, he attacks other whites – but he never said their districts or their states are places that no human being wants to live,” Mr Sharpton said.

Earlier in a tweet Mr Trump hit out at Rev Sharpton, a well-known cable TV host. Noting that he had known him for 25 years and had “always got along well”, he described him as a “con man, a troublemaker, always looking for a score”. “Hates Whites & Cops!” he said.

Mr Trump’s attack on the civil rights activist was just one of several tweets the president issued on Monday in which he reiterated his criticism of Baltimore and Congressman Cummings.

“Baltimore, under the leadership of Elijah Cummings, has the worst Crime Statistics in the Nation. 25 years of all talk, no action! So tired of listening to the same old Bull,” he said.. “next, Reverend Al will show up to complain & protest. Nothing will get done for the people in need. Sad!”

Another tweet noted that Democratic presidential hopeful Bernie Sanders described Baltimore as a “third-world city” in 2015. “Based on that statement, I assume that Bernie must now be labeled a Racist, just as a Republican would if he used that term and standard!,” Mr Trump wrote.

In a sign that Mr Trump believes that the attack will help him in next year’s election, he added:

“If the Democrats are going to defend the Radical Left ‘Squad’ and King Elijah’s Baltimore Fail, it will be a long road to 2020.”

Maryland governor Larry Hogan – one of the few Republican figures to have considered a run against Mr Trump as the Republican nominee next year – said that the president’s comments were “outrageous and inappropriate”.

Baltimore, a city just an hour north of Washington DC, has a long legacy of crime and poverty, though in recent years it has undergone significant urban regeneration.

Senator Kamala Harris, who is running for the Democratic nominee for president, has established her campaign headquarters in the city.

In a boost for Ms Harris ahead of this week’s Democratic debates which take place in Detroit on Tuesday and Wednesday nights, the Michigan Democratic Party Black Caucus endorsed the California senator on Monday.

Nonetheless, a new poll by Quinnipiac released on the eve of the debates put former vice president Joe Biden at 34 per cent among Democratic voters, with Ms Harris at 12 per cent, despite his poor performance at the first debate last month. Mr Biden will again share a stage with Ms Harris on Wednesday night.