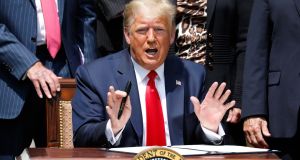 US president Donald Trump declines to take questions from journalists in the Rose Garden of the White House in Washington, on Friday. Photograph: Yuri Gripas/EPA

US president Donald Trump reiterated his call for state governors to suppress protesters as he urged authorities to “dominate the streets” during the demonstrations over the death in police custody of George Floyd.

Speaking during a White House press conference, Mr Trump encouraged states to deploy the National Guard. “Don’t be proud. Get the job done. You’ll end up doing much better in the end – call in the National Guard,” he said.

“You can’t let what’s happening, happen,” he added, referring in particular to Minneapolis and New York, which have seen large scale demonstrations.

Mr Trump’s language echoed his message to state governors in a fiery phone call earlier this week, during which he told governors that they were being perceived as “weak” in their response to the protests.

His comments emerged as focus turned to the behaviour of police forces across the country, as demonstrations took place in cities throughout the US for the 10th consecutive night.

The injured man was in a serious condition in hospital on Friday night, officials said, and the city’s police commissioner said an investigation had been opened.

New York city mayor Bill de Blasio said some police officers in the city would soon face disciplinary action, following reports of heavy-handed behaviour by police in New York where a nightly curfew is being enforced until next Monday.

“When an officer does something wrong, it is investigated,” he said. Mr de Blasio and police chief Dermot Shea had defended the conduct of police officers after clashes with demonstrators this week, highlighting instead the destruction and looting that had taken place.

In California, the family of a 22-year-old man who was shot dead by police while kneeling on the ground on Tuesday night spoke out. Police are investigating the incident, and said that the officer involved mistook a hammer held by the victim as a gun.

Minneapolis – the city where Mr Floyd lost his life last week during his arrest by police officers – announced it would ban police chokeholds and require officers to intervene any time they see the unauthorised use of force.

The new rules, which were agreed at an emergency council meeting, must still be approved by a judge.

Mayor Jacob Frey welcomed the changes. The city of Minneapolis has wrestled with police reform over the years, faced with a strong police union resistant to change.

Separately, Mr Trump continued to face criticism from senior military figures and Republicans over his threat to invoke the 1807 Insurrection Act and send in the military to quell protests.

In an interview with former Trump aide Anthony Scaramucci, Mr Trump’s one-time chief of staff John Kelly said he agreed with former defence secretary Jim Mattis that the army should not be used to respond to domestic unrest. “We should be very, very careful before we contemplate sending in active duty,” he said.

He also appeared to criticise Mr Trump’s character. “I think we need to look harder at who we elect,” he said. “I think we should look at people that are running for office and put them through the filter: What is their character like? What are their ethics?”

Mr Trump hit out at the mayor of Washington DC, Muriel Bowser, describing her as “incompetent”, as Ms Bowser authorised the painting of a “Black Lives Matter” slogan over several blocks of 16th street near the White House and changed the name of a street in the area to Black Lives Matter Plaza.