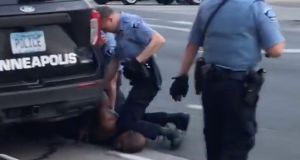 Minneapolis police officer Derek Chauvin has been charged with the murder of George Floyd. Photograph: Darnella Frazier/Facebook/AFP via Getty Images

An officer involved in the death of Minnesota man George Floyd has been charged with third-degree murder and manslaughter, as protests over Mr Floyd’s death following his arrest by white police officers swept across the United States.

Derek Chauvin was filmed placing his knee on Mr Floyd’s neck on Monday in Minneapolis as three other officers stood nearby. The 46-year-old African-American man was later pronounced dead in hospital.

His death has sparked outrage across the US, including successive nights of violent clashes between police and protesters in Minneapolis, and has raised comparisons with previous examples of black men who died while in police custody.

Announcing the charges against Mr Chauvin on Friday, Hennepin County attorney Mike Freeman said that further charges could be brought. Investigations into the other three police officers – who, like Mr Chauvin, were fired earlier this week – were ongoing, he said.

US president Donald Trump declined to comment on Mr Floyd’s death at a White House press conference on Friday, at which he didn’t take any questions after delivering a statement on China.

But earlier the president became further embroiled in an escalating row with Twitter after the social media platform in effect accused him of “glorifying violence”.

This followed a tweet by Mr Trump in the early hours of Friday about the riots in Minneapolis that included the words “when the looting starts, the shooting starts”. This prompted the social media firm to hide the tweet behind a warning stating that the post had violated Twitter rules about glorifying violence.

Twitter’s action against its highest-profile user was the second time the social media giant has labelled Mr Trump’s tweets in recent days, after it inserted a fact-check on a tweet by the president about postal voting. On Thursday Mr Trump signed an executive order outlining a review of a key piece of legislation that provides legal protections to internet companies for content posted on their platforms.

Mr Trump sought to clarify his “shooing” tweet on Friday, claiming that his comments were “spoken as a fact, not as a statement”, but his decision not to address the George Floyd death at his Rose Garden press conference was seen as unusual.

In a statement, former president Barack Obama said that although it was natural for many people to want to get back to normal after the coronavirus pandemic, “we have to remember that for millions of Americans, being treated differently on account of race is tragically, painfully, maddeningly ‘normal’ ”.

Looting and rioting took place in several sites across Minnesota for a third night on Thursday, and other cities saw demonstrations, including Phoenix, Denver, and New York, where arrests were made.

A CNN TV reporter was arrested during a live broadcast on Friday but was later released without charge. Speaking at a press conference on Friday, Minnesota’s governor, Tim Walz, apologised to CNN for the arrest. “I failed you,” he said. “The idea that a reporter should have been taken … is inexcusable.”

Mr Walz, who deployed the National Guard in response to the riots, also appealed for calm.

He said that the name of George Floyd had now joined the names of other black victims of police violence, such as Rodney King and Eric Garner, but added: “We have to restore order to our society before we can turn to [these] issues.”

“We cannot have the looting and recklessness that went on.”

He acknowledged that there was an absence of trust between the public and law enforcement and pledged to tackle the “stain” of institutional racism.

“These are things that have been brewing in this country for 400 years,” he said, adding that it was fortuitous a passerby had filmed the incident.