Migrant workers in Lebanon being abandoned at embassy gates

Some domestic workers are left outside embassies without passport, belongings or pay 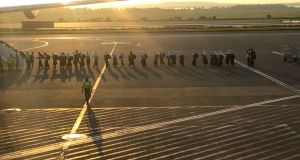 Women and girls board a plane at Entebbe international airport, Uganda, to travel to the Middle East for work. Photograph: Sally Hayden

Migrant domestic workers in Lebanon are being abandoned at their embassies’ gates, after locals say they cannot afford to pay wages any more due to the economic crisis. Some women been dumped without their passports, belongings or the pay they’re owed, according to local reports.

Both Amnesty International and Human Rights Watch have called on the Lebanese government to act to help them. On Wednesday, Lebanon’s labour minister, Lamia Yammine Douaihy, said employers who left migrant workers stranded would be punished by the legal system and “placed on a blacklist that prevents them from hiring foreign domestic workers again”.

Thousands of women go to Lebanon every year under what is known as the kafala system, a sponsorship programme that ties them to a particular employer. Investigations have found many work extremely long hours without rest days, and they’re sometimes given much less money than promised before they move.

They frequently have their passports confiscated upon arrival, cannot move jobs and aren’t paid wages directly.

By Friday, more than 11,600 people had signed an online petition calling for the system to end. A protest in Beirut on Thursday saw activists holding posters and candles while protesting the killing of George Floyd in the US, while also calling for better treatment for migrants. “Black lives matter. End kafala,” read one.

There are about 250,000 Asian and African domestic migrant workers in Lebanon, according to an Amnesty International report released last year. Their future is uncertain given that Lebanon is in the middle of an economic collapse. Its currency was long pegged to the dollar, but a lack of reserves has seen that fall apart. The coronavirus pandemic has exacerbated the situation.

Other Middle Eastern countries, including Saudi Arabia, Qatar and Jordan, have similar kafala systems, with African and Asian countries benefitting through the remittances that are sent back by the migrants to their families. Young women can often be seen lined up in African airports, wearing matching T-shirts or dresses and new headscarves, usually boarding a plane for the first time.

Complaints about exploitation are not new. Some states, including Uganda, have evenput temporary bans on sending domestic migrant workers to the Middle East in the past because of the level of abuse they have experienced.

“These women are among the most marginalised people in society, and are bearing the brunt of the economic crisis which was exacerbated by Covid-19,” said Heba Morayef, the Middle East and North Africa director for Amnesty International, in a statement, while calling for the Lebanese government to provide healthcare, accommodation and food for them.

“Under the kafala system, not only are their rights restricted but their lives are endangered as well, particularly as reports of abuse in the home have increased during confinement,” she said.