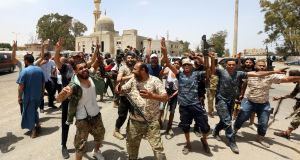 Fighters loyal to the UN-recognised Libyan government of national accord (GNA) celebrate in the Qasr bin Ghashir district south of Tripoli on Thursday. Photograph: Mahmud Turkia/AFP via Getty Images

Forces aligned with Libya’s UN-backed government have retaken the town of Tarhouna in western Libya in a final blow to renegade general Khalifa Haftar’s year-long offensive on the capital Tripoli.

The town, some 95km south east of the city, was Gen Haftar’s last stronghold in the west of the country. The surprise fall of Tarhouna, without a fight from the militias that had held the town, was the latest in a string of military reversals.

Gen Haftar’s self-styled Libya National Army was expelled last month from the important al-Watiya air base south-west of the capital. On Thursday the Tripoli-based Government of National Accord announced it had regained control over Tripoli’s international airport on the outskirts of the city – one of the first sites taken by the LNA at the start of the offensive in April last year.

The GNA and Gen Haftar had agreed this week to start UN-sponsored ceasefire talks. But Fathi Bashagha, the GNA interior minister, said the government’s forces would continue to reclaim territory despite the planned dialogue and that there could be no role for Gen Haftar in any future political arrangement.

Both sides in the Libyan conflict are heavily armed and supported by external forces in what the UN has called a dangerous proxy war.

The GNA is backed by Turkey and its latest victories were largely the result of new deployments of Turkish weaponry, including anti-aircraft batteries and drones operated by Turkish personnel. Gen Haftar has received weapons and support from the UAE, Egypt, Russia and France. More than 2,000 Russian mercenaries have been fighting alongside the LNA and militia members from Syria have joined the ranks of both sides.

After Gen Haftar lost the al-Watiya air base, Russia delivered 14 fighter jets to Libya, in a move denounced by the US military and seen as a warning to the GNA to refrain from staging further offensives. At the same time, Russian mercenaries from the Wagner Group, a security firm linked to the Kremlin, were filmed arriving on vehicles from al-Watiya to the town of Beni Walid, from where Russian aircraft transported them to Jufra air base in the centre of the country.

Analysts warn that hopes of a peaceful settlement remain slim and that a cessation of hostilities will be possible only if Russia and Turkey support it.

Speaking on Wednesday after the ceasefire talks were announced, Richard Norland, US ambassador, said: “The situation has escalated dangerously, and the participants have a choice either to watch it escalate into a full-blown regional war or to finally de-escalate”

“We believe there is a real opportunity to end the conflict, and we are going to use all of our support and influence to help that happen,” he said.

The LNA had used Tarhouna, under the control of an allied militia named Kanyat, as a base of operations against Tripoli. Gen Haftar is accused of committing crimes against civilians in the town.

The GNA health ministry said there had been no fighting when government forces retook the town, adding that the Kanyat militia had left in the early morning.

The only GNA casualties were two soldiers who were killed in a landmine explosion, he said. But in the Tarhouna general hospital, GNA forces found more than 100 refrigerated dead bodies, some with gunshot wounds or signs of torture.

“The bodies were in fridges used to store food. Some are military and others are civilians, men and women,” said Amin al-Hashemi, a spokesman for the GNA’s health ministry. “We recognised some who were in civilian clothes. There are sons of Libyan families who were against the Kanyat and had been abducted.” – Copyright The Financial Times Limited 2020