‘Time to say get your knee off our necks’: George Floyd remembered at memorial service 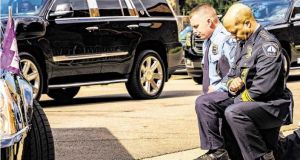 Three men charged in connection with the death of George Floyd appeared in court in Minneapolis on Thursday, as the city paid tribute to the African-American man who died last week in police custody.

Thomas Lane, J Alexander Kueng and Tou Thao, who were fired from their jobs as police officers last week, were charged with aiding and abetting second-degree murder and second-degree manslaughter. Bail was set at $750,000 each and they face up to 40 years in prison if convicted on the first charge, while the second charge carries a maximum sentence of 10 years. A fourth man, Derek Chauvin, was previously charged with second-degree murder.

Family and friends of Mr Floyd, whose death has prompted global protests, gathered for a memorial service in Minneapolis on Thursday.

Among those in attendance were Rev Jesse Jackson and Gwen Carr, the mother of Eric Garner, who died after he was held in a chokehold by an NYPD officer in 2014.

During the service, mourners paused for a moment of silence lasting eight minutes and 46 seconds – the length of time that former police officer Derek Chauvin was filmed pressing his neck on Mr Floyd as he cried out repeatedly: “I can’t breathe.”

The Rev Al Sharpton said the knee on the neck of Mr Floyd was a metaphor for the entire black experience. “It’s time for us to stand up in George’s name and say get your knee off our necks,” he said during an emotional service.

As America was poised for further protests on Thursday night, the mayor of Washington DC lifted the nightly curfew that has been in place for recent days. But Muriel Bowser demanded that out-of-state military troops leave the city.

Although the nation’s capital avoided the violence and looting that occurred earlier in the week, there has been an increasingly militarised presence around the White House and federal monuments in recent days.

Hundreds of arrests were made in New York on Wednesday night as demonstrators defied the city’s 8pm curfew, though the protests were predominantly peaceful. Further protests were expected last night throughout the country.

In a separate case in Georgia, a prosecutor testified in court on Thursday that one of the men accused of murdering Ahmaud Arbery as he was jogging in February used a racial slur as he stood over the body of the 25-year-old. This was according to another suspect who filmed the incident on his phone, the court heard.

Mr Arbery was pursued by three armed men in a predominantly white neighbourhood on a Sunday afternoon and died following three blasts from a shotgun. His memory has been invoked in demonstrations in recent days as another example of racial profiling and injustice in the United States.