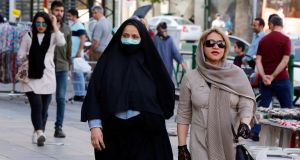 Iran has recorded a surge in coronavirus cases, raising fears of a second wave of infections in the Middle East’s most affected country.

A month after the government believed it had contained the virus, Iranian health authorities confirmed more than 3,000 cases twice on consecutive days this week, increasing the number to 164,270, with 8,074 deaths. These amounted to the largest daily peaks since 3,100 cases were recorded on March 30th.

Previous daily infections had topped at about 2,000 cases.

“The fact is that people have become completely careless regarding this disease,” said health minister Saeed Namaki. “They either have total confidence in us or think coronavirus has gone. The latter is not true at all.”

Nine of the country’s 31 districts are still under “health emergency”. Most are on Iran’s borders, risking spread to neighbouring countries. Ten counties in the oil-rich southwestern province of Khuzestan constitute a “red zone” next to Iraq and near Kuwait.

Cases are also rising in Sistan-Baluchestan in the southeast, which borders both Afghanistan and Pakistan, and in provinces that border Turkey, Armenia and Azerbaijan.

The cresting infection rate coincided with a US-Iran prisoner release that, it is hoped, might reduce tension between Tehran and Washington. Cleared of charges of stealing trade secrets, Iranian academic Sirous Asgari flew home to Tehran while naval veteran Michael White, detained during a personal visit to Iran, flew home to the US. Both men survived the virus.

Additionally, Dr Amir Taheri, a dual Iranian-US citizen who had been convicted of violating US export regulations, was freed and will be permitted to visit family in Iran.

The surge in cases of Covid-19 has overtaken Iran’s lifting of lockdown on shops, mosques, schools, businesses and travel, as well as plans to lift restrictions being retained in the “hot” provinces.

While exerting pressure on the government to open up the economy, businessmen have held the authorities responsible for failing to educate Iranians on the gravity of the situation. The government has responded by blaming the public for failing to observe social distancing, masking and other precautions.

President Hassan Rouhani said if the rules were not obeyed, the government would be forced to restore the quarantine situation again, “disrupting normal life and inflicting serious damage on the entire national economy”.

Iran’s parliament has estimated that per capita income has fallen by 25 per cent over the past three years. The World Bank reports that Iran’s growth rate has declined by more than 11 per cent following the US reintroduction of sanctions in May 2018.

Oil exports have collapsed, the value of the currency has fallen, and inflation and unemployment have risen as the global economy has stalled due to the pandemic.