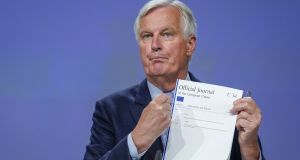 Michel Barnier holds the Official Journal of the European Union C34 during a press conference on Friday in Brussels regarding the fourth round of Brexit negotiations. Photograph: Daina Le Lardic/ Pool/Getty Images

Businesses in Northern Ireland should be able to use workarounds and exemptions to make checks on goods on the Irish Sea border less onerous, chief European Union negotiator Michel Barnier has said.

He was responding to an opinion column in The Irish Times in which contributor Newton Emerson expressed concerns that the EU was cynically taking a “maximalist” position on checks in order to use the North as a “bargaining chip”.

Mr Barnier emphasised that the special arrangements for the North – under which it will apply EU customs rules so that checks take place in ports and airports there rather than on the land border with the Republic – had been jointly drawn up and agreed with the British government, and that there was room for pragmatism within them.

“Regarding Mr Emerson’s concerns ... I would say that we can take into account those concerns within the framework as it’s currently written, because it’s written in a very precise way,” Mr Barnier told reporters after the latest round of EU-UK talks concluded.

“Simplified declarations can be used for large economic operators, supermarkets being one of them,” he said.

For goods that are imported into the North from Britain or elsewhere outside the EU, exemptions on tariffs are possible if it can be proved that the produce will not enter the single market.

“This is something we are discussing with the United Kingdom as we speak,” Mr Barnier said. “We’re ready to work with the UK further on all aspects of what the EU customs code can offer in order to facilitate trade and do everything we can do that end. But for that we need genuine commitment also from the UK side also on a number of technical issues which I have to say isn’t always forthcoming.”

A joint EU-UK committee is currently overseeing the implementation of the special arrangements for the North agreed as part of Britain’s withdrawal from the EU.

Officials have said that plans for additional infrastructure to enforce checks need to be agreed swiftly in order to be ready for when the new arrangements come into force at the end of the year.

Mr Barnier insisted he was keen to find a compromise. “I’m not dogmatic. Sometimes there is a bit of spin amongst UK politicians saying I’m some kind of dogmatic person and representing a technocratic commission, but I’m a pragmatic man,” he said.

“I’m sure if we don’t get bogged down in ideological debate with pragmatism we can pull this off.”