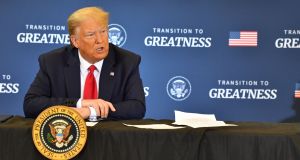 Democratic presidential candidate Joe Biden described as “despicable” Donald Trump’s claim that it was “a great day” for George Floyd, the man whose death in police custody has sparked widespread protests.

Speaking at a White House press conference to highlight better-than-expected job numbers, the US president said Mr Floyd was “looking down… saying this is a great thing happening for our country”.

During a meandering 40-minute news conference, Mr Trump addressed Mr Floyd’s death, stating “equal justice under the law means that every American receives equal treatment in every encounter with law enforcement”. But he added: “hopefully, George is looking down right now and saying this is a great thing that is happening for our country. It’s great day for him, it’s a great day for everybody. This is a great day… in terms of equality”.

While it was unclear if Mr Trump was referring specifically to Friday’s job numbers when he referred to Mr Floyd “looking down”, his decision to invoke his memory was widely panned. Mr Floyd died last week after a white police officer pressed his knee on his neck for more than eight minutes. His death has led to a renewed focus on institutional racism in America and demonstrations across the world.

While Friday’s job numbers showed that 2.5 million jobs were created last month, the data revealed that African-American and Latino workers are still disproportionately affected by the economic crisis generated by the Covid-19 lockdown. Joblessness among African-Americans increased to 16.8 per cent, and 17. 8 per cent for Hispanics, compared to the overall rate of 13.3 per cent.