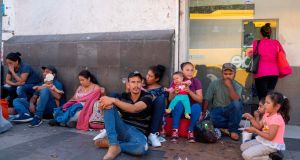 The Trump administration has scored a significant legal victory after the supreme court backed the US president’s move to limit asylum rights.

The nation’s highest court endorsed an order by Mr Trump from July prohibiting migrants arriving at the southern border from entering the United States if they had not applied for asylum in countries they had already passed through.

The decision is likely to severely curb the number of people who can seek asylum in the United States. Migrants from Central American countries such as Honduras, El Salvador and Guatemala will most likely be affected by the ruling. With Mexico now expected to process many more asylum requests from Central American citizens fleeing violence and persecution, Mexico’s government said it opposed the supreme court ruling. Mexican foreign secretary Marcelo Ebrard described the decision as “astonishing”. Mexico has long opposed a so-called “third country” agreement with the US, which would require migrants travelling north through Mexico to apply for asylum there first. The United States has threatened tariffs on Mexico if it does not do more to stem the flow of migrants trying to enter the US through the country.

Wednesday’s supreme court order overturns a previous ruling in California that had stopped the policy from taking effect.

While the supreme court intervention is not the end of the legal process, effectively it means Mr Trump’s order can be implemented immediately across the country.

“BIG United States Supreme Court WIN for the Border on Asylum!” the US president posted on Twitter following the announcement.

Two justices on the nine-member court, Sonia Sotomayor and Ruth Bader Ginsburg, dissented from the order.

Expressing her disagreement with the decision, Ms Sotomayor wrote that “Once again, the executive branch has issued a rule that seeks to upend longstanding practices regarding refugees who seek shelter from persecution.”

The American Civil Liberties Union, which challenged the ruling, warned that the rule would severely restrict asylum at the border, though the association noted that the order was a “temporary step” and would be challenged again.

House majority leader Steny Hoyer, a Democrat, also noted that further litigation would ensue. “As litigation moves forward, I hope the courts will uphold our nation’s asylum laws and ensure that our country remains the beacon of hope and justice that Lady Liberty still bears by her torch to the world,” he said.

Separately, House Democrats on Thursday took a significant step forward in initiating impeachment proceedings against Mr Trump after the House Judiciary Committee voted to broaden its powers to investigate the president.

Although the move does not initiate impeachment proceedings, it explicitly lays out how the committee’s investigations could lead to impeachment.

“This committee is engaged in an investigation that will allow us to determine whether to recommend articles of impeachment with respect to President Trump,” committee chairman Jerry Nadler said. “Some call this process an impeachment inquiry. Some call it an impeachment investigation. There is no legal difference between these terms, and I no longer care to argue about the nomenclature.”

The development comes as house speaker Nancy Pelosi was forced to defend her party’s handling of its investigations into President Trump in Congress, amid signs of divisions among Democrats about whether to move forward with impeachment hearings. Speaking at her weekly press conference, Ms Pelosi said reporters were “the only ones who are sowing” ideas about disagreement on the impeachment issue.