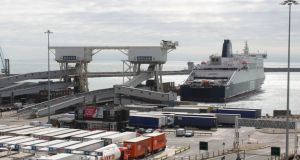 The Port of Dover is a trading cog worth £122bn (€136bn) a year in the engine of the UK’s economy. Photograph: Simon Carswell

From the Port of Dover’s terminal control tower, the north coast of France can be clearly seen on the horizon.

The European Union’s busiest passenger ferry port will, from October 31st, be just the United Kingdom’s busiest when Britain leaves the EU. This small town on England’s southeast coast is where Brexit will be felt the most.

Yesterday, the morning after the publication of the Operation Yellowhammer report, the UK government’s analysis of what might happen in a no-deal Brexit scenario, it is easy to grow alarmed at what the warnings might mean for this port.

Delays of up to 2½ days caused by “unready” lorries could not just grind a free-flowing port such as Dover to a halt but could slow a trading cog worth £122 billion (€136 billion) a year in the engine of the UK’s economy.

Watching from the control tower, in the space of 45 minutes, two ferries dock in Dover, unload 3km worth of traffic, mostly lorries, and load another 3km worth before making the return journey to France.

In a single day, 180km of freight traffic can pass through Dover. Berths here are “turned over” 10 times a day; other ports aim for one or two ship movements a day.

Dover has about 120 ferry arrivals or departures a day; more than double the number at Dublin Port.

In the long convoy of trucks constantly heading in and out of the port are the names and logos of Irish haulage companies that are well known to Irish road users.

At 34km and 90 minutes across Dover Strait, this is the English Channel’s shortest crossing. That makes this route the cheapest, quickest and most reliable for Irish traders, particularly those shipping food and other time-sensitive imports and exports that can reach destinations in less than 24 hours.

Some 40 per cent of Irish exports to the European Union pass over the UK “landbridge”. Much of that passes through Dover on its way to the French ports of Calais or Dunkirk and onwards into mainland Europe.

“In many cases, we are not a port, we’re bridge,” said Doug Bannister, chief executive of the Port of Dover, sitting in his office in Harbour House on the waterfront overlooking the English Channel.

“This is a kind of like a trade conveyer belt – it is always moving.”

It might not keep moving like it does now because of Brexit, Bannister concedes. He agrees that Dover could go from being Britain’s busiest port to the UK’s biggest pinch point in the days after a messy no-deal Brexit.

“It could be, but this is also stuff that we’ve been working with government on for years now,” he said.

Operation Yellowhammer’s conclusion was that “unready” heavy goods vehicles could reduce the critical flow rate that keeps Dover moving to between 40 and 60 per cent of current levels by November 1st if there is no deal.

This, the report said, could affect the supply of fresh foods, reduce the availability of some foods and increase prices.

“The big challenge that we have – and it’s true of any EU-facing gateway – is the degree to which the merchants themselves are ready for the various customers and security declarations,” he said.

Bannister says there was nothing in the Yellowhammer report that surprised him.

“What may have been a base-case scenario now is becoming a worst-case scenario because we put in place a whole lot of measures to make certain that it operates more effectively,” he said.

He lists off mitigating measures that are being taken, including customs declarations being made in advance and moving border checks and other controls inland with the addition of five new customs stations in southeast England (four in Kent). This will keep border checks out of Dover, which has little space to accommodate them.

Parking has been set aside for trucks at Kent’s Manston Airport, 30km away, to keep congestion out of the port. Bannister admits this is “probably not ideal” and has only been “partially tested but probably not in anger”.

Given Dover’s popularity with Irish hauliers, what happens here in the next two to three months could determine whether Irish companies decide to divert their goods to ships running directly to mainland Europe around the UK.

He cites the savings for Irish exporters using Dover compared with going directly to continental Europe that would take three times longer and tie up stock, though he concedes Irish traders must have a plan B should the UK become clogged.

“I don’t know that anybody on Earth could offer a good prediction to say: ‘Well, you know what, make certain that you’ve got a contingency in place for two weeks, three weeks or six months, because we don’t know how long this interim period would be’,” he said.

Creating a dedicated lane for fast-tracking Irish trucks passing through the UK and Dover between two EU member states is “not easily” done, says Bannister.

“How do we check at the earliest possible moment that it’s Irish-only lorries that are coming through?” he asked.

Bannister accepts that Irish business requires certainty – something nobody can offer given the unpredictable nature of Brexit politics – but he believes Dover will, regardless of any initial disruption, remain a preferred route.

“You can’t compete with geography; it is the closest point so people are always going to want to use it,” he said.

The port chief is unwilling to say whether the UK will exit with a deal, deferring the question to a UK bookmaker.

“You have to go talk to William Hill on that.”

Port of Dover traffic... in numbers

180km of freight traffic a day