London Letter: Big parties face significant threats to their seats when they go to polls 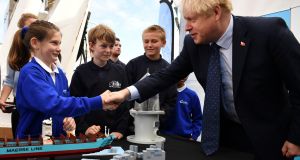 Boris Johnson went on a boat trip on Thursday to mark London International Shipping Week, promising to create thousands of jobs in shipbuilding and reviving his proposal for a bridge between Northern Ireland and Scotland. Earlier this week he visited a school in Pimlico, where he warned the eight-year-olds against spending too much time getting drunk at university.

“I did nothing except Latin and Greek for about 20 years and now I’m running the country. It’s a perfect education,” he said.

How long Johnson spends running the country will depend on the outcome of an election that has not yet been called but is already his almost exclusive focus. MPs have denied him an October election but Westminster is preparing for a vote in late November or early December.

The Conservative strategy is to reunite the coalition that won the 2016 Brexit referendum, wiping out Nigel Farage’s Brexit Party and capturing Labour seats in heavily Leave-voting areas such as the midlands and the northeast. Johnson has surrounded himself in Downing Street with veterans from the Vote Leave campaign, led by his senior adviser, Dominic Cummings, and his director of communications, Lee Cain.

Theresa May pursued a similar strategy in 2017 but Johnson’s team are taking it much further, risking the Conservatives’ reputation for fiscal responsibility with promises of billions of pounds in extra funding for the police, the National Health Service and education.

The purge of 21 moderate MPs last week reinforced the message that this is a new Conservative Party that will take on institutions like parliament and the courts as a champion of what Johnson calls “the people’s priorities”. He hopes that by marrying a nationalist, populist agenda with targeted state intervention in a platform similar to European parties such as Poland’s Law and Justice, the Conservatives will capitalise on a post-Brexit breakdown in tribal party loyalties.

The party expects to lose seats in Scotland to the Scottish National Party and to the Liberal Democrats in London and the southwest, making the challenge of winning a majority a daunting one. Persuading Labour voters who backed Brexit to switch their allegiance to the Conservatives will also be a struggle, according to a new polling analysis by Bristol University’s Paula Surridge.

Using data from the British Election Study internet panel, which tracks more than 30,000 voters between elections, Surridge looked at the “Brexit identity” of 2017 Labour voters and their willingness to vote for another party.

Surridge cautions that the level of Leave identity is likely to be stronger than average among Labour voters in some parts of the country and that the data is from March 2019, before Johnson became Conservative leader. But her conclusions are troubling for the prime minister.

“These data show the very high levels of antipathy towards the Conservative party among 2017 Labour voters, regardless of how they feel about Brexit. Even amongst those with strong Leave identity only 12 per cent rate their likelihood of voting Conservative as 6/10 or higher,” she says.

As Labour moves towards a more overtly pro-Remain position on Brexit as a defensive measure against the Liberal Democrats, Jeremy Corbyn’s team are determined that the party should not be portrayed as standard bearers for the status quo. Corbyn will promise radical transformation, promising renters the right to buy their homes from private landlords and obliging big companies to transfer a stake in their ownership to employees.

Labour has detailed policies on everything from local bus services to community policing as well as boosting local government spending to address the issues that drive discontent in many Leave-voting parts of the country.

With the Liberal Democrats, the SNP and the Brexit Party threatening both the Conservatives and Labour in different parts of the country, the outcome of the next election will depend on which of the big parties hold on to the greatest share of their 2017 vote.