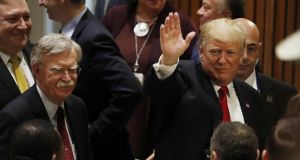 As national security adviser to Donald Trump, John Bolton was responsible for co-ordinating the efforts of the US foreign policy, defence and intelligence services and ensuring a coherent flow of informed advice to the president. His sacking this week reveals how he disregarded and subverted that role in favour of pursuing his own ultra-hawkish views on Iran, Afghanistan, North Korea, Russia and Venezuela. He narrowly failed to bring the US to war with Iran this summer. His departure once again reveals Trump’s preference for personal diplomacy and the impulsive vanity which has seen off so many of the presidential officials who crossed it.

There is some hope among remaining officials such as the ultra-loyal secretary of state Mike Pompeo that Bolton’s going will make for a more coherent US foreign policy. Trump’s tendency to tack to the hard right and then back off from some of its consequences has been a feature of his presidency. Hiring Bolton, a long-standing neoconservative, 17 months ago epitomised that. It signalled a greater commitment to military intervention even as it confirmed the administration’s hostility to multilateralism. But Bolton’s unbending personality and the combination of bureaucratic infighting and disloyalty to his boss through media leaks upended him.

As a result we may see an easing of US policy on Iran, Russia and North Korea and a subsequent readiness to engage again with Afghanistan. Preferring war, Bolton strongly opposed Trump’s recent suggestion that he might meet Iranian president Hassan Rouhani at the United Nations, just as he advised against talking directly to the Taliban and North Koreans. In this he misread the president’s preference for bombastic militarism over the real thing, a political shortcoming that gradually became intolerable for Trump.

If the US is to re-engage with Iran, the existing severe sanctions will have to be eased and he will need the backing of European powers who support diplomacy. Similar moves towards Russia could see an extension of the nuclear missile diplomacy Bolton undermined. Trump himself cancelled his Afghan talks but might revive them. He might also initiate more talks with North Korea.

Trump’s foreign policy has more to do with trade and economics than with politics and war. The principal confrontation of his administration so far is the trade war with China. That has geopolitical and geoeconomic implications for the whole world and Bolton’s departure will not shift it. Nor will it shift Trump’s assertion of trade advantages with the EU and his support for Brexit in pursuit of them. These are consistent themes which he intends to feed back into the looming presidential election campaign. His major reorientation of US foreign policy away from multilateral alliances and towards brute strength survives the passing of this dangerous hawk.