John Bolton disserved his country and himself 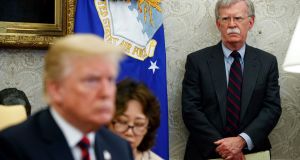 Though he’ll get little credit and even less sympathy, there is a case to be made that John Bolton deserves the nation’s thanks for helping save us from at least three Trumpian near-disasters. For a man who held the office of national security adviser for just 17 months, this is no mean feat.

Whether it represents an accomplishment is another question.

The first averted disaster would have been an agreement with Kim Jong-un, nearly reached early this year in Hanoi, that would have traded solid US economic and diplomatic concessions for slippery promises of North Korean nuclear disarmament. Presidential sycophants and Republican isolationists would also have cheered the deal, along with more than a few liberals. And Trump would have burnished his self-image as a worthy candidate for a Nobel Peace Prize.

Yet as with every past North Korean promise of denuclearisation, the deal would have been a sham. Bolton stopped it by insisting on North Korea’s full and complete nuclear disarmament up front, a condition Kim could not accept because his regime cannot survive without its weapons. Bolton called Kim on his bluff and Trump on his illusion – if only for a time. That’s still something.

The second averted disaster would have been a complete withdrawal of US forces from Syria, which Trump abruptly announced in December after a phone call with Turkish strongman Recep Tayyip Erdogan.

The withdrawal would have been a cynical betrayal of the Kurdish fighters without whom the US could not have decimated Islamic State, also known as Isis. And it would have been an invitation for all the worst players in the region – Iran and its proxies, the Bashar Assad regime, the Erdogan regime, Isis remnants – to fill the vacuum.

Bolton helped stop this, too, first by flatly contradicting the president, then by slowing the withdrawal of troops, then by manoeuvring to get Britain and France to emplace forces of their own. The result is that US forces still provide a tripwire against Assad, Erdogan and Iranian Gen Qassem Soleimani while helping to protect the Kurds.

Finally, Bolton fought tooth and nail against the disastrous agreement that Trump came close to striking with the Taliban at a surprise Camp David summit planned for last weekend.

The agreement – negotiated without the participation of the elected Afghan government – would have set a timetable for US withdrawal to coincide with the US election calendar. Other than a vague promise by the Taliban not to allow Afghanistan to again become a base for global jihad, it did not require the group to renounce its ties to al-Qaeda or do much of anything except not attack our forces on the way out.

Avoiding that, too, is something, even if it took the Taliban’s murder of Sgt First Class Elis A Barreto Ortiz in Kabul to drive Bolton’s point home to Trump. If the sergeant’s death prevents the US from hastily abandoning Afghanistan’s 18 million women to the Taliban’s misogynistic barbarism, it will not have been in vain.

Bolton holds other hawkish views with which I usually agree, including his fervent opposition to the Iran nuclear deal and his thoughts on Vladimir Putin’s Russia. I also like Bolton personally. He has an impish humour, a first-class brain and a principled world view based on a belief in America as the last best hope of Earth.

For all that, I also think Bolton disserved his president, his country and himself.

He disserved the president because he went to work for a man whose core convictions – whether on US commitments to Nato, or overtures to Iran, or relations with Russia – he knew he deeply opposed. Every president is entitled to candid advice. But presidents are also entitled to advisers who devote their energies to advancing the boss’ agenda, not to stymieing it.

He disserved the country by attempting to disguise the truth about the Trump presidency. His bureaucratic manoeuvres may have prevented foreign policy fiascoes in North Korea, Syria, Afghanistan and elsewhere, at least for the time being. But presidents usually get their way in foreign policy, especially if re-elected. By sparing Americans from the consequences of Trump’s impulses, Bolton has made re-election likelier – and, in all likelihood, the very outcomes he laboured to prevent.

And he has disserved himself. The manner in which Bolton was dismissed – straight out the door, without even the fig leaf of resignation – is of a piece with the trademark nastiness that has distinguished this president all his life. Bolton could have been under no illusions about the nature of the man he chose to serve. He did so anyway. Now he must be wondering: For what?

“He that lieth down with dogs shall rise up with fleas” is an adage at least as old as Poor Richard’s Almanack. John Bolton, like so many others before him, has risen up. – New York Times