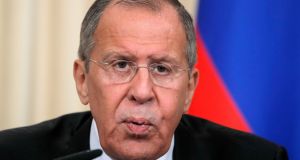 Russian foreign minister Sergei Lavrov: “I have never seen this man, have never met him, and have never monitored his career or movements.” Photograph: Sergei Ilnitsky/EPA

The Kremlin on Tuesday played down US media reports of a CIA spy inside Russia’s presidential administration, calling them “pulp fiction”, but said a low-level official who Russian media suggested was the agent had worked there before being fired.

CNN reported on Monday that the United States had successfully extracted one of its highest-level covert sources inside Russia in 2017. The New York Times later said the informant had sent secrets to Washington for decades.

A source familiar with US monitoring of Russian activities confirmed that such a CIA informant inside the Russian government did exist and that the informant had been extracted and brought to the United States.

The source indicated that US officials were seriously concerned that Kremlin officials had made public what they claimed was the individual’s name.

Russian daily newspaper Kommersant said on Tuesday the official may have been a man called Oleg Smolenkov, who is reported to have disappeared with his wife and three children while on holiday in Montenegro in 2017 and is now reported to be living in the United States.

Kommersant published a picture of a house in Virginia which it said had been bought by a man called Smolenkov in 2018.

Asked about the matter, Kremlin spokesman Dmitry Peskov said that Mr Smolenkov had really worked in the Russian presidential administration but had been fired in 2016/17.

“It is true that Smolenkov worked in the presidential administration, but he was fired several years ago. His job was not at a senior official level,” he said.

Mr Smolenkov did not have direct access to President Vladimir Putin, Mr Peskov added, declining with a laugh to confirm whether he had been a US agent or not.

“I can’t confirm that . . . . I don’t know whether he was an agent. I can only confirm that there was such a person in the presidential administration, who was later sacked.

“All this US media speculation about who urgently extracted who and saved who from who and so on – this is more the genre of pulp fiction, crime reading, so let’s leave it up to them,” said Mr Peskov.

CNN reported on Monday that the US decision to extract its informant had occurred soon after a May 2017 meeting in the Oval Office in which US president Donald Trump had discussed highly classified intelligence with Mr Lavrov.

Mr Lavrov said on Tuesday that nobody had divulged any secrets to him at the meeting with Mr Trump.

A US government source also insisted that Mr Trump did not disclose secrets, such as the informant’s existence or identity, at any meeting with Russian officials. – Reuters

1 Woman stranded in Ireland due to pandemic has ‘miracle baby’
2 Covid-19: Critical cases from NI could put pressure on services in Republic
3 US election: ‘Donald Trump needs to go. White America got what they want’
4 Transmission of Covid-19 on flight into Ireland linked to 59 infections
5 Australia demands answers after women taken from Qatar Airways flight and strip-searched
Real news has value SUBSCRIBE