Kashmir in grip of civil disobedience over loss of autonomy

Shops, schools and offices empty in response to lockdown and looming rule by New Delhi 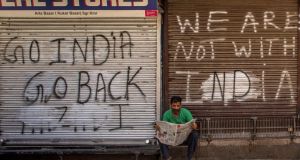 A Kashmiri man in front of closed shops covered with graffiti in the commercial hub of Srinagar city centre. Photograph: Yawar Nazir/Getty

An informal but widespread civil disobedience movement has gripped India’s northern disputed Kashmir region, to protest against the federal government’s lockdown of the region six weeks ago, when it revoked the special status that guaranteed its autonomy.

Students, shopkeepers, fruit orchard owners, businessmen and public and private sector workers have all participated in the extensive, non-violent initiative to oppose government efforts to portray a sense of normalcy during the clampdown on the Muslim-majority region.

“For us, our identity is at stake and safeguarding it is our priority,” Shabir Ahmad, a shopkeeper in Kashmir’s summer capital Srinagar, told Reuters earlier this week.

On August 5th, prime minister Narendra Modi not only revoked Kashmir’s autonomy after more than 70 years, but also split the state into two federally administered territories that will be governed by New Delhi from October 31st.

To help prevent protests, Mr Modi’s Hindu nationalist Bharatiya Janata Party (BJP) government has deployed more than 70,000 additional paramilitaries in one of the world’s most militarised regions and cut all telephone, mobile and internet connections across Kashmir.

Though in recent weeks the authorities in Kashmir have opened a large number of landlines in Kashmir, mobile telephones and internet services remain suspended for the sixth week running, creating what a Srinagar resident called an “information black hole”.

Thousands of people line up daily outside offices and homes with landlines to try to contact family or friends, but the majority are unable to get through despite repeated attempts.

“I hope I live to tell this horrendous tale to our next generation about how India did not even let us talk to our family and friends,” said Bint-e-Ali, a Kashmiri in Bangalore, concerned about her ill grandmother in Srinagar.

Curfew continues to be imposed across Kashmir and wire barricades, manned by heavily armed and masked paramilitary personnel, impede movement in Srinagar and surrounding areas.

Consequently, a large number of Kashmiris have opted to silently oppose this blockade as part of a mass civil disobedience movement, similar to the one launched by Mahatma Gandhi against the British colonisers in the early 20th century that eventually led to India’s freedom.

Hence, schools and colleges are without students in Srinagar and smaller Kashmiri towns and all market places, restaurants and hotels in the region remain deserted, with neither staff nor patrons.

On posters in Srinagar which began appearing last month, shopkeepers are asked to open late evenings and early mornings, to enable locals to buy essential food items, and close down thereafter.

They comply despite the authorities and security forces urging them to pursue their daily routines, work and businesses. Even in government offices attendance is scarce.

Meanwhile, senior Indian editor Krishna Kumar has excoriated the national media for abdicating its watchdog role in Kashmir and of “collaborating” with the federal government by portraying a picture of normalcy in the restive region.

Writing in the Hindu newspaper on Wednesday, Kumar said that the majority of 400 Indian television channels, 1,000 newspapers and some 3,000 radio stations had “plunged into the patriotic duty of drumming up support for the government’s narrative that all was well in Kashmir”.

Every piece of information that contests the establishment’s narrative on Kashmir, Kumar said, had come from foreign media organisations like the BBC, the Washington Post, the New York Times and overseas news agencies.

But with foreign correspondents being denied permission to travel to Kashmir, these organisations were largely dependent on local Kashmiri journalists to provide them with information about reality on the ground.

This, Kumar said, begged the question as to why Indian mainstream media had proven itself unable to find the space or resources for these intrepid Kashmiri journalists.