Mugabe family at odds with government over funeral plans 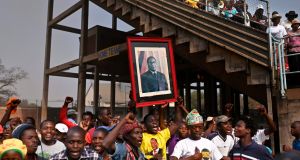 Youth carrying a portrait of Zimbabwe’s late former president Robert Mugabe at the Rufaro stadium in the capital, Harare, where his body will lie in state. Photograph: Tony Karumba/AFP

Robert Mugabe’s close family have spoken out against the Zimbabwean government for failing to consult them on the funeral and burial arrangements it has planned for the former president who died last week, aged 95.

In a statement released on Thursday through Patrick Zhuwao, a nephew of Mr Mugabe’s, the family said they were shocked by the government’s attempt “to coerce us to accept a programme for the funeral and burial” that ran contrary to Mr Mugabe’s wishes.

The statement went on to say that one of the late leader’s final wishes was for his wife, Grace Mugabe, to “never leave the casket during [Mr Mugabe’s] funeral” until his body has been buried.

Mr Mugabe died in a Singapore hospital last week and his body arrived home on Wednesday. Officials subsequently outlined a five-day memorial programme that would finish with a state funeral on Saturday and his burial the following day.

It is understood that President Emmerson Mnangagwa’s government wanted Mr Mugabe’s remains to be buried at the National Heroes Acre in Harare, where many of his war of independence comrades have been laid to rest over the years.

However, some of the Mugabe clan remain bitter at the manner in which he was forced from office by Mr Mnangagwa and his supporters in the ruling Zanu-PF party, following a military takeover in November 2017.

Another of Mr Mugabe’s nephews, Leo Mugabe, told reporters on Thursday that Zimbabwe’s first post-colonial president would be buried next week in his home district of Zvimba, with only close relatives in attendance, rather than at the national monument.

“His body will lie in state at Kutama [village] on Sunday night, followed by a private burial – either Monday or Tuesday. No National Heroes Acre. That’s the decision of the whole family,” Leo Mugabe said.

By Thursday evening Mr Mnangagwa’s government had yet to respond to the Mugabes’ announcement that only close family are invited to the burial of a man seen by many as the southern African country’s founding father.

Many ordinary Zimbabweans are also torn over how best to mourn a leader once hailed for ending British colonial rule in 1980, but who later purged his foes in brutal crackdowns and destroyed the economy, forcing millions to flee in search of employment.