How will John Bolton’s dismissal affect US foreign policy? 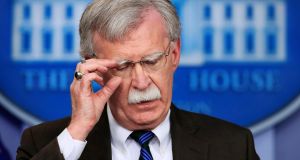 Donald Trump’s national security adviser John Bolton was a fierce opponent of the plan for the remaining US troops to leave Afghanistan by the end of the year. Photograph: Manuel Balce Ceneta/AP

Donald Trump’s abrupt dismissal of John Bolton, his national security adviser, may reflect the near breakdown in personal relations between the two men, as well as Bolton’s rivalry with the secretary of state, Mike Pompeo, but it will also have implications for US foreign policy in a range of flashpoints.

The US president’s antipathy to globalism and multilateralism will remain but there will be a rebalancing towards Trump’s instinctive anti-interventionism, coupled with his penchant for personal diplomacy. At best, it may also lead to greater policy co-ordination between Washington’s national security agencies and, as a result, more consistent advice being handed to an often under-briefed president.

In Afghanistan Bolton was a fierce opponent of the plan for the remaining US troops to leave by the end of the year. Yet ironically, only this weekend Trump appears to have come closer to Bolton, decisively abandoning his plan for extraordinary talks at Camp David with Taliban leaders, two days before the anniversary of 9/11.

Trump said he ditched the secret summit after a suicide bomber killed an American soldier in Kabul, but his decision also reflected growing unease in the defence community that the president was planning to abandon Afghanistan to terrorists without any plan to protect the legitimate Afghan government ahead of national elections.

Bolton conspicuously went into meetings on Venezuela with documents emphasising plans to send US troops into the country, presumably to overthrow the left-wing government of Nicolás Maduro.

Bolton’s overly optimistic assessments of both how quickly Maduro would fall, and the gathering mood of rebellion in the Venezuelan military, dented his credibility with Trump. But US support for the opposition leader, Juan Guaidó, remains firm, and only this week US officials were pressing the European Union to step up sanctions. Nevertheless, the policy has lost momentum.

Pompeo, Bolton and the vice-president, Mike Pence, all advised Trump this summer to mount an attack on Iran after a US drone was shot down. Trump pulled back, fearing the consequences of a military confrontation. This has left him dependent on a policy of maximum economic pressure, but European allies, resisted by Trump, have argued that if the US is not going to attack Iran, the only alternative is to talk to Tehran.

Bolton’s predictions of an opposition uprising, leading to the regime change he craves, have failed to materialise as reformers and hardliners unite against an external oppressor. Trump, with a penchant for high-wire summits, would like a meeting with the Iranian president, Hassan Rouhani, if terms could be agreed leading to a renegotiated nuclear deal. But that will only happen if Bolton’s departure is accompanied by a US willingness to lift sanctions on Iranian oil exports.

Trump has welcomed the French government’s efforts to bring Russia in from the cold, a persistent theme of the US president’s foreign policy that has been thwarted by European and bipartisan resistance in Washington. That resistance was supported by Bolton, an old adversary of Vladimir Putin who did not see Russia outside a cold war framework.

Trump, stripped of Bolton, now has a better chance to pursue an opening with Moscow after the French president, Emmanuel Macron, encouraged talks on Ukraine.

Bolton had a record during his period in the Bush administration of taking on the Pyongyang administration and under Trump had advocated pre-emptive strikes. He strongly opposed opening a path towards talks with Kim Jong-un. That soon put him at odds with Trump when the president began efforts to engage in face-to-face negotiations with the North Korean leader.

Trump has consistently ignored Bolton’s advice and met Kim multiple times, even though he says he is in no rush to strike a deal. Meanwhile, Bolton pointed to Kim’s untrustworthiness in refusing to surrender his nuclear programme and North Korea’s repeated short-range missile tests.

Bolton said these tests were in breach of UN resolutions, but Trump disagreed. Bolton has even been accused of operating behind the scenes to torpedo progress on the talks, including working against Stephen Biegun, the special envoy for North Korea negotiations. – Guardian