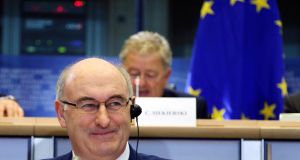 “The penny is finally dropping” with the UK on Brexit, Phil Hogan predicts with new confidence. The probability of a deal is rising, he insists.

The Irish Agriculture Commissioner, who has today been nominated to take over the EU trade portfolio in which he will play a key role in the next phase of talks, points optimistically to the revival of the idea of an all-Ireland backstop. The idea was dropped from the original Withdrawal Agreement by then British prime minister Theresa May under pressure from unionists, but her successor Boris Johnson appears to be re-examining all-Ireland based solutions.

“If we can build on that we certainly might get closer to one another in terms of a possible outcome,” he says.

There is some way to go, he admits, insisting that the EU would not accept a partial backstop. “It would have to include all goods . . . in terms of any agreement,” he says.

“I remain hopeful that the penny is finally dropping with the UK that there are pragmatic and practical solutions can actually be introduced into the debate at this stage – albeit at the eleventh hour – that may find some common ground between the EU and the UK.”

Are we heading in the direction of the first version of the backstop? “Yes. The Taoiseach has indicated in the last 24 hours that the Northern Ireland-only backstop is quite an interesting idea to revisit.”

Hogan was this morning nominated to take over the important trade portfolio by Commission president-elect Ursula von der Leyen, in what is being seen as both a tribute to his widely regarded work and an expression of solidarity with Ireland over Brexit.

In the agriculture portfolio, Hogan presided over significant reform of the common agricultural policy (Cap), three emergency aid packages for the sector, the creation of a special Africa taskforce, and contributed to trade talks with Japan, Mexico, Canada and Mercosur.

He says he is “very honoured and pleased to get such a substantial economic portfolio”.

In a crucial economic role – the Commission negotiates on behalf of all the member states on international trade – Hogan will also take charge of the negotiations with the UK on Brexit and its future relationship with the EU. The EU’s Article 50 Task Force under Michel Barnier, responsible for negotiating the exit deal, will be replaced by a Hogan-led team to craft a long-term trade agreement with the UK.

The divorce proceedings have to be completed first before the future relationship which would include a free-trade agreement. - Hogan

He predicts the establishment of the new group “will take probably six to eight months once we know what the outcome of the present negotiations are. Then I expect it will take a number of years before we conclude the negotiations.”

He reiterates the EU insistence that nothing can happen, deal or no deal, before the UK accepts the obligations in the Withdrawal Agreement on citizens’ rights, the Brexit bill, and the backstop. “The divorce proceedings have to be completed first before the future relationship which would include a free-trade agreement.

“But we will not be starting from scratch in the case of the UK because they have been part of the EU for the last 45 years. I expect that we will be able to move more quickly than we would in any other trade negotiation.”

Hogan will face close questioning by MEPs in hearings over the next few weeks which are likely to focus on the Mercosur trade agreement with five south American countries. Many MEPs are deeply critical of the deal because they say it fails to tackle sustainability issues like deforestation.

Hogan, who played an important part in the final stages of talks, is adamant the opposite is true. “We have used market access for the first time to yield substantial progress in relation to sustainability,” he insists, “to deal with issues that are very difficult and appalling like the deforestation of the Amazon.”

In the absence of the agreement, he argues, the EU simply does not have any leverage. “There’s a separate chapter on sustainability. There’s a dispute resolution mechanism if there is not full compliance with the Paris climate agreement. And ultimately a decision can be made by any member state, and by the European Parliament, that we will abandon this particular deal with the Mercosur countries if not all aspects are going to be complied with.”

He sees the key new challenges as the UK talks, “to try and eliminate the escalation of a trade war between the US and the EU”, discussions with Australia and New Zealand, and the reform of the World Trade Organisation.

He also makes a case for what he says is the enhanced enforcement and implementation of recently signed trade deals. “We’re not getting, in my view, the value of the deals we have completed with the rest of the world at this stage. And we need to put some structures in place in order to get better opportunities for our businesses, farmers and for our services.”