Bodyguards rushed Israeli prime minister Binyamin Netanyahu off the stage at an election campaign rally in the city of Ashdod after sirens warning of a possible rocket attack from Gaza sounded, Israeli TV showed. Video: Reuters 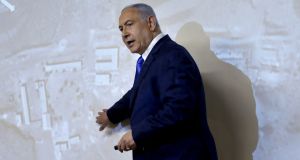 Israeli prime minister Binyamin Netanyahu announced his intention on Tuesday to annex the Jordan Valley in the occupied West Bank if he wins next week’s general election.

“Today, I announce my intention, after the establishment of a new government, to apply Israeli sovereignty to the Jordan Valley and the northern Dead Sea,” Mr Netanyahu said in a speech broadcast live on Israeli television channels.

Mr Netanyahu reaffirmed a pledge to annex all Jewish settlements throughout the West Bank, but said such a move would not be made before publication of a long-awaited US peace plan and consultations with President Donald Trump. There was no immediate comment from Washington.

Palestinian prime minister Mohammad Shtayyeh, in a statement issued shortly before Mr Netanyahu spoke, amid reports of a possible annexation announcement, said the Israeli leader is “a prime destroyer of the peace process”.

Earlier Mr Netanyahu denied claims that he had used sensitive intelligence about Iran’s nuclear programme to boost his election campaign.

In a Monday night press conference, broadcast live on Israeli television channels, Mr Netanyahu disclosed new information about what he described as “additional secret sites in Iran’s nuclear programme”, citing a specific location in Abadeh as “a site for developing nuclear weapons”.

Benny Gantz, the head of the centrist Blue and White party, which is running neck and neck with Netanyahu’s Likud ahead of next Tuesday’s poll, accused him of misusing top -secret information for political gain.

“Netanyahu’s use of sensitive security information for the purposes of his campaign attests to bad judgment. Even in his last days as prime minister, Netanyahu is only looking out for Netanyahu.”

But officials in the prime minister’s office said that national security professionals had urged Mr Netanyahu to reveal the information on Monday evening, immediately after a press conference in Vienna by International Atomic Energy Agency acting chief Cornel Feruta, following his meetings with Iranian officials in Tehran.

The nuclear watchdog revealed this week it had found traces of uranium at a separate facility that Mr Netanyahu revealed in another announcement a year ago, calling it a “secret atomic warehouse”. It also confirmed that Tehran was installing hundreds of advanced centrifuges for enriching uranium.

Mr Netanyahu’s press conference was complemented by satellite images of the Abadeh site, which allegedly was razed by the Iranians after they knew it had been discovered by Israel.

Mr Netanyahu urged “pressure, pressure and more pressure against the tyrants in Iran”.

Iran’s foreign minister, Mohammad Javad Zarif, responded to Mr Netanyahu on Twitter, referring to him as “the possessor of real nukes” who “cries wolf – on an alleged ‘demolished’ site in Iran”.

He accused Mr Netanyahu of wanting another war.

Israeli commentators noted that Mr Netanyahu’s comments were broadcast live on Likud party social media accounts, with the party’s logo and icons of its ballot slip superimposed on the presentation.

Mr Netanyahu’s press conference came against growing Israeli concern over efforts by French president Emmanuel Macron to extricate Iran from sanctions and to revive the nuclear agreement and the possibility that US president Donald Trump will hold talks with his Iranian counterpart Hassan Rouhani.

According to the Ma’ariv newspaper, the army and Mossad officials also criticised Mr Netanyahu for his press conference and recent revelations about Israeli strikes at Iranian and pro-Iranian militia targets at various locations across the Middle East.

Israel’s departure from its traditional policy of ambiguity has created an uncomfortable atmosphere and was getting the army and Mossad involved in Mr Netanyahu’s election campaign, the report said. – Additional reporting: Reuters