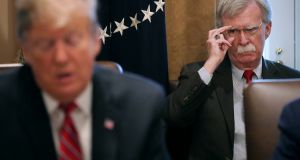 John Bolton says he offered to resign as national security adviser after US president Donald Trump informed him that his services were no longer needed. Photograph: Chip Somodevilla/Getty Images

US president Donald Trump has fired John Bolton as national security adviser after months of tension over policy towards Iran and North Korea, saying he “disagreed strongly” with the hawkish aide on many positions.

“I informed John Bolton last night that his services are no longer needed at the White House,” Mr Trump tweeted on Tuesday, adding that “others in the administration” had also disagreed with the White House’s top foreign policy official.

But Mr Bolton offered a different account of his departure, saying he had submitted his resignation.

“I offered to resign last night and President Trump said, ‘Let’s talk about it tomorrow’,” Mr Bolton tweeted shortly after Mr Trump made the announcement. Mr Trump said he would name a new national security adviser next week.

It is unclear if the departure will lead to a softening of Mr Trump’s policy of “maximum pressure” on Iran, which has been hit by sweeping US sanctions since Washington unilaterally withdrew from a landmark Obama-era nuclear deal.

A hardliner who is a vocal proponent of the need to project American power, Mr Bolton had called for regime change in Iran and North Korea even before he entered the White House.

He was the third person to hold the critical White House position, having replaced HR McMaster, a retired general who fell out of favour with the president. Mr McMaster was appointed after Mike Flynn, his first security adviser, was fired within three weeks.

....I asked John for his resignation, which was given to me this morning. I thank John very much for his service. I will be naming a new National Security Advisor next week.

I offered to resign last night and President Trump said, "Let's talk about it tomorrow."

Mr Bolton’s departure follows a series of disagreements over US foreign policy at the highest levels of the Trump administration, including how to respond to provocations from Iran and North Korea as well as Mr Trump’s recent effort to negotiate a peace accord with the Taliban in Afghanistan.

“Bolton’s firing should be the least surprising news imaginable. Trump wants to cut a deal with Iran, the Taliban, and North Korea. He clearly thinks it would be easier to do that without Bolton so he’s out,” said Tom Wright of the Brookings Institution.

Most recently, Mr Bolton disagreed with Mr Trump over a peace deal that Zalmay Khalilzad, the US state department’s Afghanistan envoy, had negotiated with the Taliban.

The firing of Mr Bolton, a Yale-educated lawyer and skilled bureaucratic infighter, comes after months of questions about whether Mr Trump was about to dismiss him.

In May, Mr Trump rejected suggestions that he was tiring of Mr Bolton, saying that he appreciated his advice even when it was out of tune with his other senior advisers.

“I actually temper John, which is pretty amazing,” Mr Trump said that month when asked if he retained confidence in Mr Bolton, who was initially passed over when Mr McMaster was named to the position.

While Mr Trump continues to support denuclearisation negotiations with North Korea and has said he would meet the leaders of Iran, Mr Bolton was deeply sceptical about that stance.

Oil prices fell on the news Mr Bolton was leaving the White House, with traders betting the likelihood of a conflict with Iran had been reduced. Brent crude, the international benchmark, fell by slightly more than $1 or roughly 1.5 per cent in the five minutes after Mr Trump tweeted, to trade near $62.70 a barrel.

His exit is the latest in a series of cast changes in Mr Trump’s foreign policy team, coming after December’s departure of Jim Mattis as defence secretary. Mr Pompeo was appointed as the second secretary of state after Mr Trump fired Rex Tillerson last year.

Mr Bolton was, along with Mr Trump, a strong proponent of Brexit and was working with Boris Johnson’s government to ensure the US started to negotiate a free trade deal with Britain once the UK leaves the EU. He was also influential in the US’s decision last month to withdraw from the Intermediate-Range Nuclear Forces treaty after the US concluded that Russia was not adhering to the cold-war era arms control pact. – Copyright The Financial Times Limited 2019