Some 90 summoned to court were dismissed, most saying they could not be impartial in case 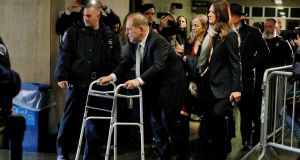 Dozens of potential jurors were excused on Wednesday from serving in the rape trial of Harvey Weinstein, as the former movie producer’s lawyers accused the judge presiding over the trial of bias.

In all, 90 of the 120 potential jurors summoned to state court in Manhattan on the second day of jury selection were dismissed, most after saying they could not be impartial in the case.

Weinstein (67) has pleaded not guilty to charges of assaulting two women in New York, and faces life in prison if convicted on the most serious charge, predatory sexual assault. His trial began on Monday and could last as long as two months.

“I read every article and it’s gonna be very hard for someone who’s been assaulted multiple times,” one female potential juror said, explaining why she could not be impartial.

“I was assaulted in my past, so I don’t think I can be a fair juror,” another woman said.

A third woman said she had “a very close friend who had an encounter with the defendant”.

Many other jurors simply said they could not be fair, without giving a reason.

The 30 potential jurors who were not dismissed Wednesday are expected to return January 16th for the next phase of jury selection.

Earlier on Wednesday, Weinstein’s lawyers asked to bar high-profile lawyer Gloria Allred from attending the trial, saying they might call her as a witness, but Justice James Burke denied the request. Ms Allred represents three of the women who are expected to testify against Weinstein.

“Harvey Weinstein’s defence appeared to want to interfere with my ability to represent my three clients who will be witnesses in his trial,” Ms Allred told reporters outside the courthouse.

One of Weinstein’s lawyers, Arthur Aidala, filed a motion asking Mr Burke to recuse himself, saying the judge had made “prejudicial and inflammatory comments” that showed “animus” toward Weinstein.

Mr Burke on Tuesday threatened to revoke Weinstein’s bail after catching him using his cellphone in court, asking him, “Is this really the way you want to end up in jail for the rest of your life, by texting and violating a court order?”

Mr Aidala said the question suggested Mr Burke had already decided Weinstein was guilty and should be sentenced to life. Mr Burke has not ruled on the motion.

Since 2017, more than 80 women, including many famous actresses, have accused Weinstein of sexual misconduct dating back decades.

The Weinstein allegations helped fuel the #MeToo movement which encouraged women to go public with misconduct allegations against powerful men.

Weinstein has denied the allegations, saying any sexual encounters he had were consensual.

The former film producer made his mark with critically acclaimed films such as “The English Patient” and “Shakespeare in Love.”

Prosecutors need 12 jurors to back a conviction, while Weinstein needs just one holdout for a hung jury.