Prince Harry and Meghan Markle to ‘step back’ from royal duties

The couple said they planned to ‘work to become financially independent’ 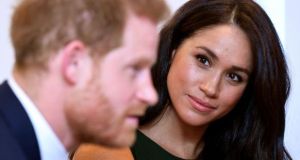 Britain’s Prince Harry and his wife Meghan Markle, the duchess of Sussex, have announced that they intend to step back from royal duties.

In a statement on Wednesday, they said: “After many months of reflection and internal discussions, we have chosen to make a transition this year in starting to carve out a progressive new role within the institution.

“We intend to step back as ‘senior’ members of the Royal Family and work to become financially independent, while continuing to fully support Her Majesty The Queen.”

They said: “We now plan to balance our time between the United Kingdom and North America, continuing to honour our duty to The Queen, the Commonwealth, and our patronages.

“This geographic balance will enable us to raise our son with an appreciation for the royal tradition into which he was born, while also providing our family with the space to focus on the next chapter, including the launch of our new charitable entity”, details of which they would share “in due course”.

The couple married in May 2018 at Windsor Castle and last May they had their first child, a boy they named Archie Harrison Mountbatten-Windsor.

Prince Harry (35) is sixth in line to the throne, and media speculation had been rife that he and the duchess (38) planned to step back from public life ever since their return this month from a six-week holiday in Canada.

The couple have had an increasingly tense relationship with the British media.

The duchess said last year she was warned before she married Prince Harry that UK tabloids would “destroy” her life.

At the same time, Prince Harry issued a ferocious attack on the British tabloids, accusing them of a “ruthless” campaign against his wife. He also issued legal proceedings against the owners of the Sun and the Daily Mirror over alleged phone hacking.

In an interview for the ITV documentary Harry & Meghan: An African Journey, he said he would not be bullied by sections of the media “into playing a game that killed my mum”. – Reuters/PA