Students across India protest after attack at Delhi university 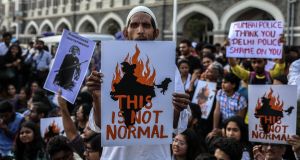 Students and activists take part in a protest against Sunday’s attacks on the Jawaharlal Nehru University campus, in front of Gateway of India in Mumbai on Monday. Photograph: Divyakant Solanki/EPA

Demonstrations erupted across India on Monday after a brutal attack on students and teachers of a premier university in the federal capital New Delhi on Sunday evening in which at least 40 people were badly injured.

Tens of thousands of students on campuses in dozens of major and smaller cities such as Chennai, Delhi, Hyderabad, Mumbai and Kolkata expressed solidarity with the victims from Jawaharlal Nehru University (JNU) who were assaulted by masked men wielding iron rods, sticks and sledgehammers.

Eyewitnesses said the assailants stormed into the JNU campus at about 6.30pm local time on Sunday, soon after a group of students had completed a peaceful protest march against the recent tuition and hostel fee hike announced by the authorities.

They said that for the next three hours the aggressors chased, attacked and terrorised JNU students and staff in their hostels and respective faculties, with the mayhem playing out on numerous television news channels until late at night.

Many of the injured accused police of deliberately failing to stop the mob from entering and vandalising the campus, despite frantic distress calls to them from teachers and students.

The ABVP, however, denied the allegations and accused the university’s leftist groups of attacking and injuring many of its cadres.

JNU alumni and Nobel laureate Abhijit Banerjee has urged the federal government to investigate the violence and establish the truth of what happened in the national interest.

In an interview to the News 18.com television news channel, Mr Banerjee, who won the 2019 Nobel for economics, said that any Indian who cares about the nation’s image worldwide should be worried about the violence.

“This has too many echoes of the years when Germany was moving towards Nazi rule,” he said.

Delhi police, which are controlled by the federal government, have launched an inquiry into the JNU fracas and said that social media and CCTV footage would form part of its investigation. But many Opposition MPs are sceptical about the outcome of these investigations.

Established in 1969 and named after independent India’s first prime minister, Jawaharlal Nehru, JNU is one of India’s most prestigious universities and has a history of left-wing activism.

In recent years many of its student bodies have publicly criticised the BJP, accusing it of curbing free speech and furthering its agenda of imposing Hindutva or Hindu hegemony upon India.

Meanwhile, parallel protests continue across India against the BJP government’s new citizenship law, which many demonstrators maintain is discriminatory and against the country’s secular constitution and inclusive traditions.

In early December the government enacted the Citizenship Amendment Act (CAA), which assures Indian nationality to non-Muslim minorities from three Islamic states: Afghanistan, Bangladesh and Pakistan. These include Hindus, Sikhs, Buddhists and Christians.

More than 25 people, including children, have died in clashes with the police during these protests, many in northern Uttar Pradesh state, which is India’s largest and ruled by the BJP.