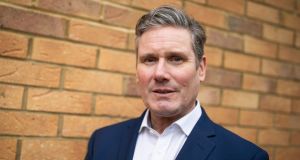 Keir Starmer was backed by Unison, one of the UK’s largest unions, which described him as the best candidate to ‘bring the party together’. Photograph: Aaron Chown/PA Wire

Keir Starmer has gained the initiative in the race to become the next leader of the UK’s main opposition Labour Party after he was endorsed by Unison, one of Britain’s biggest unions – while also leading the field in backing from MPs.

The shadow Brexit secretary picked up 23 signatures from MPs on the first day of the contest, far ahead of his rivals – and above the threshold of 21 needed to reach the ballot of the membership.

He was further buoyed when Unison, the public services union, announced it would back Mr Starmer as a leader who could “bring the party together” and win back the trust of former Labour voters.

“Unions created the Labour party to give working people a voice in Westminster. But it can only achieve for them, their families, their communities and the country’s public services when in government,” said Dave Prentis, Unison general secretary.

“Keir has a clear vision to get Labour back to the winning ways of the past. He is best placed to take on Boris Johnson, hold this government to account and ensure Labour can return to power and once more change working people’s lives for the better.”

Support of the union barons is crucial in the Labour leadership race, not least because successful candidates need a certain level of backing from “affiliates” such as the trade unions. Unison was one of six unions to back Jeremy Corbyn for the leadership in 2015.

Under Labour’s convoluted rules, candidates for the leadership need the support of at least 21 MPs or MEPs to reach the ballot, as well as the backing of a certain level of either constituency Labour parties or affiliates.

After the first day of nominations Mr Starmer had 23 votes from MPs, Rebecca Long Bailey seven, Lisa Nandy two, Jess Phillips six, Emily Thornberry one and Clive Lewis zero. The result of the contest will be announced at a special conference on April 4th.

Meanwhile, it emerged on Wednesday that prosecutors are considering whether to bring charges against five people as part of an investigation into alleged anti-Semitism by Labour members.

Four people were arrested and two interviewed under caution last year as part of the inquiry, and investigators have passed five files of evidence to the Crown Prosecution Service.

The investigation was prompted by an internal Labour dossier detailing anti-Semitic messages on social media allegedly posted by party members, which was obtained by radio station LBC in 2018.

Reports at the time suggested that the documents included details of 45 cases, including one which allegedly read: “We shall rid the Jews who are a cancer on us all.”

On Wednesday, Metropolitan Police commissioner Cressida Dick told LBC that the decision on whether to prosecute any of the five people whose cases the police believe merited possible further action was in the hands of the CPS.

“It is a very complex crime type, to be honest – there is a lot for them to look at and a lot for them to consider as to whether there is either sufficient evidence to charge and whether it is in the public interest so to do,” she said.

The Labour party said: “Anti-Semitism has no place in our society and we are committed to challenging and campaigning against it in all its forms.”

Asked about the five files, a Labour spokesman said: “They are all expelled or have left the party under suspension investigation . . . all hate crimes should be investigated.”

The failure of the previous leadership to clamp down on incidents of anti-Semitism by some members has been widely criticised by public figures, including the chief rabbi.

The issue was raised during the first hustings of the parliamentary Labour party on Tuesday evening, when Halifax MP Holly Lynch asked candidates what they would do to tackle the issue.

Ms Phillips, a centrist leadership contender, told MPs in the room that “Jewish people were afraid of us governing”, according to accounts of the meeting.

But Ms Nandy highlighted reports at the weekend that suggested Ms Long Bailey had not backed a vote to support the International Holocaust Remembrance Alliance definition of anti-Semitism at meetings of the party’s ruling national executive committee.

Ms Thornberry said that during shadow cabinet meetings only she and Mr Starmer had raised the issue under Mr Corbyn. – Copyright The Financial Times Limited 2020