Australia: Further hot and dangerous conditions due this week 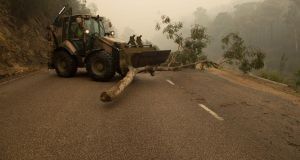 Plant operators of the Australian military use a backhoe to clear fire-damaged trees from the great Alpine road between Bairnsdale and Omeo in Victoria. Photograph: Getty Images

Bolstered by cooler weather and desperately needed rain, exhausted firefighters in Australia have raced to shore up defences against deadly wildfires before a forecast return of hot and dangerous conditions late this week.

The first hints of the financial toll from the disaster began to emerge on Tuesday.

That estimate comes one day after prime minister Scott Morrison said the government was committing an extra 2 billion Australian dollars ( €1.6 billion) toward the recovery effort in addition to the tens of millions of dollars that have already been promised.

Mr Morrison’s funding announcement came amid fierce criticism from many Australians who say he has been too slow to respond to the crisis.

He has also faced backlash for downplaying the need for his government to address climate change, which experts say helps supercharge the blazes.

The fires, fuelled by drought and the country’s hottest and driest year on record, have been raging since September – months earlier than is typical for Australia’s annual wildfire season.

So far, the blazes have killed 25 people, destroyed 2,000 homes and scorched an area twice the size of the US state of Maryland.

In New South Wales (NSW), 130 fires were still burning on Tuesday, around 50 of which were uncontrolled.

The day’s cooler weather, with rain in some regions, was providing thousands of exhausted firefighters a “psychological and emotional” reprieve as they scrambled to strengthen containment lines around the blazes before temperatures rose again, NSW Rural Fire Service commissioner Shane Fitzsimmons said.

“It really is about shoring up protection to limit the damage potential and the outbreak of these fires over the coming days,” he told the Australian Broadcasting Corp.

The rain was not heavy enough to extinguish the blazes.

Victoria state Emergency Services Minister Lisa Neville said on Monday at least 200mm of rain would need to fall in a short time to snuff out the fires — around 20 times what has fallen across the region in the past day. And officials warned that Australia’s wildfire season — which generally lasts through March — was nowhere near its end.

The rain was also complicating firefighters’ attempts to strategically backburn certain areas and was making the ground slippery for fire trucks. – PA