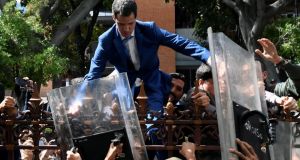 Venezuelan opposition leader and self-proclaimed acting president Juan Guaidó is helped to climb a railing in an attempt to reach the National Assembly building in Caracas, on January 5th. Photograph: Federico Parra/AFP via Getty

The chavista regime in Venezuela has been sharply criticised by its South American neighbours and the European Union for orchestrating the ousting of opposition leader Juan Guaidó as head of the country’s national assembly.

Sunday’s manoeuvre is the latest authoritarian escalation by president Nicolás Maduro and puts him in control of what until now had been the country’s last independent institution. The Lima Group of Western hemisphere nations condemned what it described as “the use of force by the dictatorial regime” to remove Mr Guaidó.

He and other members of the opposition-dominated legislature were forcibly prevented by security forces from entering the session scheduled to re-elect him as president of the body. On another day of political drama in the crisis-stricken country television footage showed Mr Guaidó unsuccessfully attempting to gain access to the building by scrambling over its railings.

With many opposition legislators locked out from the vote the United Socialist Party of Mr Maduro managed amidst chaotic scenes to install the little-known Luis Parra as the assembly’s new head. He came to prominence last month when he was expelled by the opposition when he was named as one of a number of its deputies allegedly involved in a government-operated corruption scheme.

Mr Maduro took to state television to mock Mr Guiadó, claiming he had been deposed by the votes of his own opposition colleagues.

After they were denied access to the assembly building deputies loyal to Mr Guaidó met instead in the offices of a nearby newspaper where they re-elected him as their leader, claiming he received the support of 100 out of 167 legislators. As well as the rebuke from the Lima Group, Sunday’s disputed parliamentary session was condemned by the European Union, the United States and the leftist governments of Mexico and Argentina.

Mr Guaidó’s removal demonstrates the increasing confidence of Mr Maduro a year since since his rival declared himself president in a bid to force him from power. Since then he has seen Mr Guaidó recognised as Venezuela’s legitimate ruler by dozens of countries and has had to face down an aborted military uprising even as the the economy’s implosion has spread hunger across the oil-rich country and forced millions of Venezuelans to flee in the region’s biggest ever mass exodus.

But backed by Cuba and Russia, Mr Maduro has faced down international pressure to agree free elections and instead has used the diplomatic breathing space gained by engaging in on-again off-again talks hosted by Norway to crack down on his domestic opponents.

Opposition politicians have been arrested and independent media harassed in a campaign of intimidation that has placed Mr Guaidó and his supporters on the defensive.