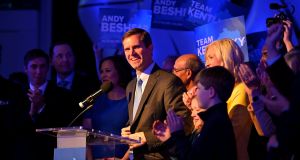 Democrat Andy Beshear was on course to win the gubernatorial race in Kentucky against Republican incumbent Matt Bevin. Photograph: Reuters

A series of state level elections across the United States has unnerved Republicans, a year out from the 2020 presidential race.

On Tuesday voters in a handful of states including Virginia, Kentucky and Mississippi went to the polls to elect candidates for local and state positions.

In one of the biggest surprises of the night the Democrats were on course to win the gubernatorial race in Kentucky where Andy Beshear, whose father previously served as governor, was poised to defeat incumbent Matt Bevin.

That the traditionally red state elected a Democratic governor is a blow to the GOP, and in particular to President Donald Trump, who campaigned in the state on the eve of the election, urging voters to support Mr Bevin.

“If you lose, they are going to say Trump suffered the greatest defeat in the history of the world . . . You can’t let that happen to me!” he said at a campaign rally in Lexington.

As the results came in on Tuesday night it became clear that Trump’s worst fears had been borne out. That Bevin’s expected defeat took place in a state the president won by 30 points in 2016, and that is the home of Senate majority leader Mitch McConnell, was particularly worrying.

Republicans have sought to downplay the significance of the result, noting that Mr Bevin was a particularly unpopular governor. In April he suggested that teachers striking in the state were leaving children exposed to molestation, while his stance on Medicaid alienated voters.

Republicans also won every other contest in the state, including the position of attorney general, which was won by an African-American candidate for the first time in the state’s history and the first Republican in 70 years.

Mr Trump was defiant, despite his decision to campaign for Mr Bevin, tweeting as the results came in that five out of the six elections won by Republicans were candidates he had introduced at the rally. He also claimed that Mr Bevin had picked up at least 15 points in the last days, “but perhaps not enough”, adding “Fake News will blame Trump!”

Nonetheless, Mr Beshear’s victory is a worrying sign for Republicans and may offer a salutary lesson to candidates about the dangers of tying their political fortunes to a divisive president such as Mr Trump.

There was better news for Republicans in Mississippi, where their candidate won the gubernatorial race. But elsewhere, the electoral outcome was concerning for Trump’s party as it plots a path to victory next November in the congressional and presidential elections.

In Virginia, Democrats won control of both chambers in the state legislature for the first time since 1993, making strong inroads in Richmond and suburban areas outside Washington. Voters apparently put aside the controversy earlier this year involving governor Ralph Northam and other senior Democrats in the state following the emergence of pictures that appeared to show him dressed up in blackface.

Women and minorities outperformed in the election, with Virginia electing the first Muslim woman to the state senate.

With Democrats now controlling all levers of power in Virginia, the state is likely to move forward with real policy changes such as tighter gun controls and greater protections for Medicaid, Democratic priorities that were stymied by Republican control.

It also means that Democrats will be in power when the state legislature is tasked with drawing state and congressional district lines following the 2020 census.

Republican vulnerability in America’s suburbs was also in evidence in Pennsylvania. In Delaware County, which borders Philadelphia, Democrats won control of the council for the first time since the civil war.

The results in Virginia and Pennsylvania mirror the voting patterns that emerged in the midterm elections a year ago, when Democrats won back control of the House of Representatives by winning over voters in the nation’s suburbs.

It’s a worrying sign for Republicans as they prepare for the next election cycle. Virginia, in particular, appears to be moving permanently towards becoming a Democratic state as it becomes increasingly diverse. Democratic successes in Pennsylvania, particularly in last year’s midterm elections, may also be a warning sign for Republicans given the state’s importance as a swing state.

Trump’s victory in Pennsylvania in 2016 secured the presidency for him. Winning again in 2020 is critical if he is to become a second-term president.