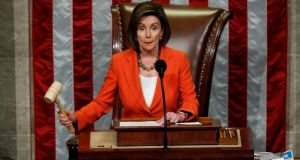 Speaker of the House Nancy Pelosi as the US House of Representatives voted to set up the next steps in the impeachment inquiry of President Donald Trump. Photograph: Tom Brenner

As the House of Representatives endorsed the impeachment inquiry into President Donald Trump in a vote on Thursday, elsewhere in the US Capitol the latest witness in the probe testified before lawmakers. Tim Morrison, a senior figure in the National Security Council and a figure of interest to investigators, was questioned by the House committees leading the investigation.

Mr Morrison corroborated an account given by charge d’affaires in Ukraine Bill Taylor last week about efforts by the Trump administration to force Ukraine to investigate a company that employed former vice-president Joe Biden’s son, in exchange for promised military aid and a meeting with the US president.

Mr Morrison confirmed that he told Mr Taylor, the acting ambassador in Kiev, about the push by the White House to link the aid and a presidential meeting to the opening of investigation into Burisma, the Ukrainian gas company that employed Hunter Biden on its board.

He said he had two phone calls with Mr Taylor in early September – one telling him that Gordon Sondland, the US ambassador to the European Union, had told the Ukrainians that aid would be withheld unless they announced an investigation into Burisma. A second phone call discussed a conversation Mr Trump had with Mr Sondland in which he said that a public investigation into Burisma must be opened, Mr Morrison said.

Like White House official Alexander Vindman who testified earlier this week, Mr Morrison said he reported Mr Trump’s controversial phone call with Ukrainian president Volodymr Zelenskiy on July 25th – in which he asked the Ukrainian government to investigate the Bidens – to White House lawyers. However, he specifically said that he did not see anything illegal in the phone call.

Meanwhile, another former aide to Mr Bolton, Charles Kupperman, was awaiting a court decision as to whether he was legally bound to testify before the impeachment inquiry. Mr Kupperman filed the lawsuit last week, seeking to resolve the conflict between the demand from Congress that he be questioned, and the order from the White House that he should not co-operate with the inquiry.

Mr Kupperman did not appear before the House committees as scheduled on Monday. The former official, who left the Trump administration after Mr Bolton resigned in September, was subpoenaed by the committees to appear. Following his no-show, House Democratic lawyers wrote to his legal representatives, noting that the president had no “authority to direct the conduct of private citizens who are no longer his subordinates – much less to direct them to defy a lawful command from a coequal branch of government”.

Though Congress is due to begin a week-long recess on Friday, the committees leading the impeachment inquiry will continue to hear from witnesses privately next week.

The impeachment inquiry, now in its fifth week, is likely to advance rapidly in the coming weeks following the passing of a resolution on Thursday which moves the inquiry into a new and more public phase. House Intelligence chairman Adam Schiff is likely to call witnesses to testify publicly as part of the inquiry, and to publicly release documents related to the inquiry.

The White House denounced Thursday’s impeachment vote, which was opposed by all Republicans in the House. “With today’s vote, Speaker Pelosi and the Democrats have done nothing more than enshrine unacceptable violations of due process into House rules,” an official White House statement said.