Woman who gave Trump the finger elected in Virginia 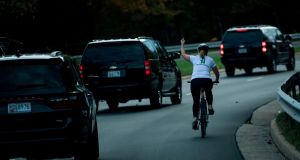 On October 29th, 2017 Juli Briskman gestures with her middle finger as a motorcade with US president Donald Trump departs Trump National Golf Course in Sterling, Virginia. Photo by Brendan Smialowski/AFP via Getty

The woman who lost her job after giving US president Donald Trump’s motorcade the middle finger in 2017 won a local government seat in Virginia in one of several major progressive wins for the state in the Tuesday elections.

Virginia also elected its first Muslim state senator and Democrats took control of both the state senate and house for the first time in more than two decades.

The viral photo of Juli Briskman giving the middle finger to Trump’s motorcade while riding a bike was a key part of her campaign to be on the county board of supervisors in the Virginia county that includes the Trump National Golf Club.

Briskman will represent her district in Loudoun county, near Washington DC, after defeating the incumbent Republican.

Briskman lost her job as a government contractor after the photo went viral in 2017. She filed a wrongful-termination lawsuit, which was dismissed, but she successfully sued for severance.

“It was just sort of like, here I am on my bike. I’ve got nothing, right?” Ms Briskman told the Guardian in November 2017.

“This is pretty much the only thing I had to express my opinion. He wasn’t going to hear me through bullet-proof glass – so that was pretty much how I could say what I wanted to say, right?”

Also in Virginia on Tuesday, the first Muslim state senator was elected. Ghazala Hashmi, a Democrat, focused her campaign on improving education in the state to defeat the Republican incumbent.

Ms Hashmi said in a statement: “Thank you for all of you who, regardless of party, want to build a stronger, safer, and more equitable Commonwealth.”

Virginia, which borders Washington DC, has traditionally been conservative - choosing Republican candidates in every presidential primary from 1968 to 2004, according to the Washington Post.

All sex crime suspects should keep anonymity unless they convicted, report recommends

1 No time limits and no pre-booking: what the unpublished pub reopening guidelines reveal
2 Gardaí surrender 13 people to Polish police
3 Teenage boy dies at Powerscourt Waterfall in Co Wicklow
4 Fresh investigation into the murder of Michaela McAreavey in Mauritius
5 Ex-solicitors charged with fraud over theft of six-figure sum from banks over 18 months
Real news has value SUBSCRIBE