Leader of Liberal Democrats rules out coalition with Labour 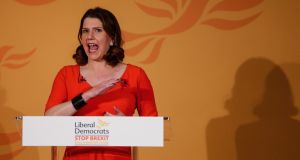 “I am absolutely, categorically ruling out Liberal Democrat votes putting Jeremy Corbyn into No. 10,” she said at her campaign launch in London.

Ms Swinson has pledged to stop Brexit should her party be elected into government and “build a brighter future”.

At the launch of the Liberal Democrats general election campaign in Westminster, Ms Swinson said “change is possible” and credited her party’s “values” as the reason MPs from other parties have defected to hers.

Swinson told gathered supporters and media: “Our country needs us to be more ambitious right now. And we are rising to that challenge. Because this choice is about the future of our country for generations to come.”

Ms Swinson said Mr Johnson is “modelling himself” on US president Donald Trump, while Mr Corbyn “will not give you a straight answer” on Brexit. “We, Liberal Democrats, will stop Brexit,” she promised.

Ms Swinson said staying in the EU would produce a £50 billion “Remain bonus” that could be spent on public services.

“Any type of Brexit will damage our economy, will cost jobs and starve our public services of the resources that they need. So we know that that Remain bonus will be £50 billion that we can spend on our public services, investing in our schools and in the welfare system to help the poorest in our society.

“So every vote for the Liberal Democrats is a vote to stop Brexit and invest that £50 billion in our public services.”

“A vote for Johnson’s Conservatives is a vote to betray our NHS in a sell-out to Trump. They want a race to the bottom in standards and protections. They want to move us towards a more deregulated American model of how to run the economy,” Mr Corbyn said. – Reuters/PA