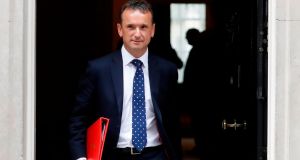 Alun Cairns: “This is a very sensitive matter and in the light of continued speculation, I write to tender my resignation as Secretary of State,” he said in a letter to Boris Johnson. Photograph: Tolga Akmen/AFP via Getty Images

A cabinet minister has resigned on the first official day of the UK election campaign over allegations he knew a Conservative candidate for the Welsh assembly had sabotaged a rape trial before he was selected by the party.

Alun Cairns said he was not aware his former aide was responsible for the collapse of the case in August 2018 after making claims about the victim’s sexual history.

But an email obtained by BBC Wales this week revealed the Welsh secretary was told about the incident in August 2018, four months before Ross England was selected as a candidate.

Mr Cairns received an email from Geraint Evans, his special adviser, on August 2nd, 2018. It said: “I have spoken to Ross and he is confident no action will be taken by the court.”

Christina Rees, the shadow secretary of state for Wales, accused Mr Cairns of “brazenly lying” about his knowledge of the case.

In his resignation letter to the prime minister on Wednesday morning, Mr Cairns said: “You will be aware of allegations relating to the actions of a party employee and candidate for the Welsh Assembly elections in the Vale of Glamorgan.

“This is a very sensitive matter, and in light of continued speculation, I write to tender my resignation as secretary of state for Wales. I will co-operate in full with the investigation under the ministerial code which will now take place and I am confident I will be cleared of any breach or wrongdoing.”

Mr Cairns did not suggest he would not defend his Vale of Glamorgan seat at the general election.

Giving evidence in court last year at the trial of his friend James Hackett, Mr England told the jury he had had a casual sexual relationship with the complainant after the judge said evidence about her sexual history was inadmissible.

The comment prompted the judge, Stephen John Hopkins QC, to halt the trial: Mr Hackett was later convicted of rape at a retrial.

“You have managed single-handed, and I have no doubt it was deliberate on your part, to sabotage this trial,” Judge Hopkins told Mr England. “Get out of my court.”

Mr England was suspended as a candidate last week.

Responding to Mr Cairns’s resignation, Labour MP Jess Phillips tweeted: “Good. It is so hard to go through a rape trial without it being wrecked and then having to go for a retrial.”

Jo Swinson, the Liberal Democrat leader, added: “It is right that he has resigned. The allegations that were made were incredibly serious.”

“I think there are real questions to be asked about why it has taken him so long to come to this conclusion.” – Copyright The Financial Times Limited 2019