Gender gap closing at EU’s political table, but a long way to go 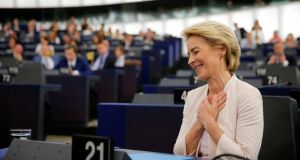 Ursula von der Leyen has been frustrated in her attempt to achieve gender balance in the European Union’s executive. Photograph: Reuters

Ursula von der Leyen has not had it all her own way in the formation of her new European Commission. And MEPs, in rejecting three of her candidates – the Romanian, the Hungarian and the French nominees – largely over conflict-of-interest claims, have also stymied her much-vaunted attempt to achieve gender balance in the union’s executive for the first time.

Two of the rejected were women, while the member states, we believe, are in the process of only nominating one woman out of three replacement nominees. But even so, Von der Leyen’s commission still improves on previous commissions’ gender balance.

The issue was topic of the day for the Brussels branch of the Institute for International and European Affairs on Monday night. It was addressed by Irish Oxford academic Dr Jennifer Cassidy on “gender of diplomacy”, not – please note – “gender and diplomacy”.

Cassidy’s thesis is that “diplomacy has a gender as it is primarily focused on and dominated by masculine characteristics” such as hardness, toughness or power, and so, historically, women have been marginalised in diplomatic life. It is a process, she argues, that has been legitimised by such seminal writers as Machiavelli and Harold Nicolson, who have described it as a profession for which women are not fit.

Although Cassidy argues that the position of women is changing and improving, there remains a tendency to push women diplomats into “soft” areas like human rights rather than postings in war zones or dealing with military matters. Such stereotyping, she says, is reflected in preferential treatment of men in heavyweight ambassadorial postings like Washington, London, or the EU.

New evidence of the progress made by women in politics has also emerged this week, with the publication of an important cross-European statistical survey, Women in Politics: Local and European trends, carried out by the Council of European Municipalities and Regions (CEMR) in 41 European states.

It shows that in national parliaments, women’s share of places in 2019 is at 29 per cent, the same proportion as of women local representatives. But only 15 per cent of mayors are female. Iceland did best to get women into local politics: 47 per cent of local councillors in the country are female and 36 per cent of mayors.

How does Ireland compare?

Ireland’s showing is poor. Only 23.3 per cent of all elected representatives are women, compared with a Europe-wide average of 34 per cent  (Top three: Iceland: 46; Sweden: 44; France: 40).

Things have improved, but in most areas Ireland finds itself close to bottom of the league table (ninth from bottom in local councillors). In the 10 years from 2008 to 2017, female council representation in Ireland rose from 17 to 22 per cent while Iceland, at the top of the table now, has 44 per cent female representation, followed by Sweden (43 per cent) and Ukraine (42).

In the Dáil women now constitute 22.2 per cent, up nine percentage points, compared to Spain (47.4 per cent) and Finland (47 per cent) at the top of the table.

Ireland performs best in the European Parliament, where five of its 11 MEPs are women, although five countries now have majority female delegations – Finland, France, Luxembourg, the Netherlands and Sweden.

The research does show that countries that require mandatory quotas do better than those who don’t, but only marginally so. It notes the case of Belgium, where the far-right Vlaams Belang party gamed the quota system by correctly alternating men and women on the ballot paper as it was required by law to do, but after the election substituting men for women elected higher on the list.

The report warns that although progress is being made, at the current rate of change it will take 107 years to close the gender gap in Europe’s political institutions.