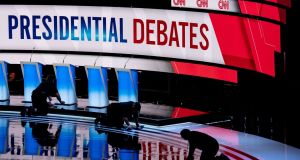 The suspense was high. The hour was late. The questions about the next Democratic debate were many: Ten candidates or 11? Two nights or one? One billionaire or none? A debate qualifying process that was equal parts spectacle and grievance session ticked toward a midnight deadline on Wednesday with one thing certain: The Democratic presidential race is entering a new, field-culling phase. And the stage is about to feel smaller, even if not everyone will go quietly.

Low-polling candidates aware of the debate rules for months spent the otherwise sleepy pre-Labor Day week moaning about being left out of the next debate, on September 12th. The mid-tier candidates, assured of making that debate and the next one in October, began to look ahead anxiously to the winter debates. And the top-tier candidates prepared, finally, to all appear on stage together.

All of it adds up to the biggest winnowing moment so far of a 2020 presidential field that at one point featured two dozen candidates: the elimination of long-shot candidates who have crowded debate stages, competed for the attention of overwhelmed voters and clustered at forums and cattle calls across the country this summer.

Some winnowing has come voluntarily. Senator Kirsten Gillibrand of New York said on Wednesday she was dropping out of the race, citing her failure to make the next debate as a setback she could not overcome. Low-performing candidates like governor Jay Inslee of Washington, former governor John Hickenlooper of Colorado and representative Seth Moulton of Massachusetts have bowed to political reality in recent weeks and left the race; others have been slower to take public hints, insisting that their breakthrough may yet come.

The frenetic nature of the process was in part a result of a set of rules that extended the uncertainty to the final hours: Back in May, the Democratic National Committee chairman, Tom Perez, announced the threshold for the September and October debates: Candidates would need to have 130,000 individual donors and receive at least 2 per cent support in four qualifying polls.

The deadline was 11.59pm on Wednesday. Two new polls released in the morning did not change the equation, but it did send reporters and campaign operatives scrambling to discover whether any further polls would be released. By early evening, though, it seemed clear that no eleventh-hour reprieve was coming for billionaire Tom Steyer, who needed one more 2 per cent showing to qualify, or for representative Tulsi Gabbard of Hawaii, who needed two more.

That meant the debate field would be set at 10, and limit the proceedings to one night, in contrast to the first two debates that split 20 candidates over two nights and prevented face-to-face showdowns between some of the top candidates. For instance, senator Elizabeth Warren did not appear on the same night as former vice-president Joe Biden in either debate.

The debate process created different camps in the party. Many Democrats were crossing their fingers that Steyer didn’t force his way into the September debate and make it a two-night affair, but few were willing to criticise him publicly because he is one of the party’s biggest donors. Some Democrats are angry with Perez over long-established qualification rules, while others have quiet sympathy for what they say is a thankless plight.

And while party officials spent the summer humouring the no-shot candidates who have failed to demonstrate support through fundraising or polling, patience among some Democrats was running low.

“If you are a few months before the Iowa caucuses and you can’t get 130,000 donors and can’t crack 2 per cent in a couple of polls, that’s on you,” said Mo Elleithee, a former top DNC official who is now the executive director of Georgetown University’s Institute of Politics. “There is an appetite to start being able to focus on the candidates who have demonstrated the most movement in this race. That is probably shared by a lot of Democratic primary voters.”

Still, some party officials lamented a system that limited exposure for lesser-known candidates. The Nebraska Democratic Party chairwoman, Jane Kleeb, a leading figure among rural Democrats, said a debate process that excluded governor Steve Bullock of Montana was bad for a party trying to win back voters who flocked to President Donald Trump in 2016.

“Voters aren’t even going to know who Steve Bullock is and that we have a governor representing a red state and doing it with strong progressive values,” Kleeb said. “To me it shows the strength of our party that we have so many people running.”

Candidates on the brink of missing the debate spent this week airing grievances and regrets. In a last-ditch bid to make the debate, Gillibrand this month bought more than $1 million in ads in New Hampshire and Iowa, hoping to garner enough support to reach the 2 per cent polling threshold.

But there were no qualifying polls in those two states after the ads began airing and before Wednesday’s deadline, and Gillibrand acknowledged that without the exposure of a debate, “I just didn’t see our path.”

Steyer’s campaign on Wednesday expressed disappointment that there have been no qualifying polls from Nevada. Eight of the past nine qualifying polls have been surveys of the national Democratic electorate. Steyer hasn’t reached 2 per cent in any of them, while he has reached that threshold in polls of Iowa and South Carolina, two of the four early-voting states where he has spent $7 million on TV advertising.

“We were given the rules, we were playing by the rules,” a Steyer spokesman, Alberto Lammers, said. “This is not a national race. Everybody who understands the race understands how this works.”

Then there are Bullock and senator Michael Bennet of Colorado. Neither is particularly close to qualifying for additional debates. They are well short in donors, and neither has reached 2 per cent in a single qualifying poll since February. Bennet has for months been a vocal critic of the debate qualification process, and on Wednesday his campaign sent a list of 11 questions to Perez, complaining about the qualification rules, demanding to know why DNC members and state party leaders were not consulted on the thresholds.

Bullock’s campaign lamented “arbitrary DNC debate rules” and said the forums should have room for the only candidate in the race who won a state Trump carried in 2016. Bullock pledged to stay in the race through the Iowa caucuses in February whether or not he makes the debates.

“The fact is in many ways you have rules that have empowered Google and Facebook,” he said. “I don’t think it’s empowered the Democratic Party. History has shown time and time again that it’s not what happens in September that determines who our nominee is or who is successful.”

The debate drama is not limited to the autumn debates. Aides to candidates who will appear next month in Houston expressed concern about as-yet-unannounced rising thresholds to participate in the party’s November and December debates. If Perez again raises the donor threshold, it would force campaigns to redirect money earmarked for early-state organising toward social media campaigns, in order to drive up donor numbers.

Former representative Beto O’Rourke of Texas, whose fundraising has dried up after a fast start, emailed supporters on Tuesday, warning that without more contributions, he could be left off the winter debate stage.

While Gillibrand and others have withdrawn, no top-tier candidate has – a break from the past two crowded presidential campaigns. Tim Pawlenty terminated his 2012 campaign in the Republican primary in August 2011 after losing the Ames Straw Poll to a fellow Minnesotan, Michele Bachmann. Scott Walker quit the 2016 race in September 2015 when his big-spending campaign ran out of money.

“Anyone who isn’t going to be on the debate stage in September when voters are starting to tune in is essentially running a zombie campaign,” said Alex Conant, a Republican strategist who worked for Pawlenty and Marco Rubio in 2016. “Voters want to support people on the debate stage. The takeaway from the last couple cycles is that the only thing that matters is debates.”

If nothing else, the downsizing of the September debate week – one overstuffed stage instead of two – has afforded weary Democrats a prospective night off. Even political die-hards had groaned at the spectre of a second debate on a Friday evening, viewing it as a kind of municipal homework assignment.

Of course, the respite may be short-lived: With one more qualifying poll, Steyer will make the October debate stage, likely making that a two-night affair. – New York Times

The 10 candidates who will participate in September’s debate are: