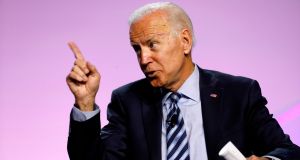 Former US vice-president Joe Biden: his national lead among Democrats has been fairly durable through the summer, polls show. Photograph: Jeff Kowalsky/AFP/Getty Images

New opinion polls show Joe Biden with a significant national lead in the Democratic presidential race as the contest heads into the intense autumn campaign season, with senators Elizabeth Warren and Bernie Sanders rounding out a trio that seems to have separated from the rest of the primary field.

The new data, which shows Mr Biden earning the support of about one in three Democratic voters, stands in contrast to a poll published on Monday that showed a virtual three-way tie between Mr Biden, Ms Warren and Mr Sanders at about 20 per cent support each. On Wednesday, the director of that poll called those results an outlier.

The latest round of polling suggests that Mr Biden’s national lead – at this early stage in the campaign – has been relatively durable throughout the summer. It has been fuelled in part by the former vice-president’s strong name recognition, calculations about general election viability and goodwill from rank-and-file Democratic voters, even as there are signs of greater volatility on the ground for Mr Biden in the early-voting presidential primary states.

Still, national polls can offer a snapshot of the Democratic electorate’s mood and of the extent to which various controversies have caught the attention of voters. One of the polls published on Wednesday, conducted by Quinnipiac University, showed Mr Biden as the top choice of 32 per cent of Democratic voters and independent voters who lean Democratic. Ms Warren came in at 19 per cent, and Mr Sanders was at 15 per cent.

Those numbers were close to the figures Quinnipiac found at the beginning of the month, with Mr Biden’s standing unchanged despite several weeks of scrutiny over a series of verbal gaffes. Separately, a poll from USA Today and Suffolk University also found Mr Biden at 32 per cent, followed by Ms Warren at 14 per cent and Sanders at 12 per cent.

Those numbers stand in contrast to a Monmouth University Poll that drew attention earlier in the week. It showed Mr Biden plummeting 13 percentage points from June, putting him at 19 per cent, with Ms Warren and Mr Sanders at 20 per cent each. On Wednesday, Patrick Murray, director of that poll, said in a statement that it was clear the results had diverged from the polling consensus.

“It occurs very infrequently, but every pollster who has been in this business a while recognises that outliers happen,” Mr Murray said. “This appears to be one of those instances.”

Because there is no national primary, the standing of the candidates in the early-voting primary states may matter far more than nationwide snapshots. Some surveys this summer have shown Mr Biden’s lead in Iowa and New Hampshire ebb since he entered the race in April, and conversations with voters in Iowa have revealed signs of an enthusiasm challenge for the front-runner.

Ms Warren and Mr Sanders, meanwhile, have established themselves in a tier above the rest of the Democratic field. No other candidate has consistently reached double-digit support in recent surveys; in the Quinnipiac and Suffolk polls, the only other candidates with 5 per cent or better were Kamala Harris and Pete Buttigieg. More than a dozen of the Democrats got just 1 per cent – or less.

The Democratic candidates will now have only one presidential debate next month, after two rounds of two-night debates earlier this summer.

As of Wednesday’s deadline to qualify for the September debate, only 10 candidates had done so, meaning they can all fit on one stage under the rules set by the Democratic National Committee. The 10 candidates are: